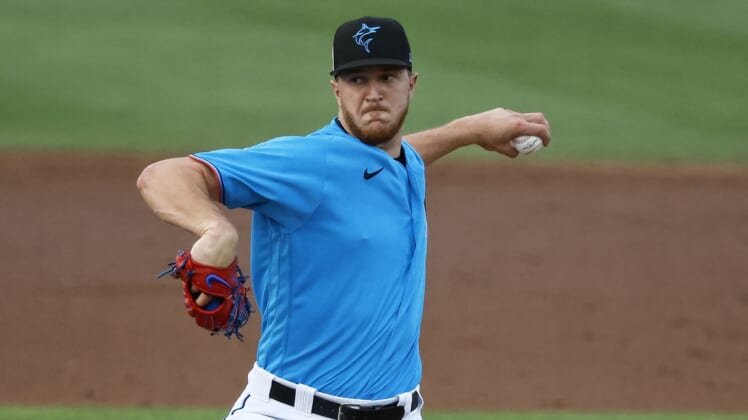 The Philadelphia Phillies and host Miami Marlins will send left-handers to the mound hoping for better fortunes than their first starts brought when the teams meet Saturday night for the third game of their four-game series.

Miami left-hander Trevor Rogers (0-1, 3.60 ERA) was the runner-up for National League Rookie of the Year in 2021. But in his 2022 debut on Sunday, Rogers took a loss against the Giants in San Francisco, allowing six hits, one walk and three runs, two earned, in five innings.

Suarez allowed those runs in the first inning, which was quite unexpected considering how dominant he was in 2021, when he made 27 relief appearances and 12 starts. He went 8-5 with a stellar 1.36 ERA, racking up four saves and also throwing a four-hit shutout.

Of interest Saturday will be how Rogers fares against Philadelphia’s Rhys Hoskins. The first baseman is hitting .455 with two homers in 11 career at-bats against Rogers.

Rogers will also have to deal with former Marlins catcher J.T. Realmuto, who is in his fourth season with the Phillies.

The Phillies, who have lost four straight games, gave Realmuto a rest day on Friday, after he went 4-for-4 with a walk, a steal and a run scored on Thursday.
“J.T. did all he could do,” Phillies manager Joe Girardi said.

Realmuto hit .263 with 17 homers last year. If those numbers seem a bit pedestrian, note that catchers throughout the majors, batted .229 on average in 2021.

This year, Realmuto is off to a .360 start, and he gives the Phillies a major advantage at catcher.

Schwarber and Castellanos, however, did their slugging elsewhere. The Phillies summoned them in an effort to get to the postseason for the first time since 2011.

The Marlins, who have made the playoffs just once since 2003, similarly brought in two sluggers — corner outfielders Jorge Soler and Avisail Garcia. They combined to hit 56 homers last year, and Garcia raised his barrel rate from 3.8 percent in 2020 to 12.2 in 2021.

Miami’s offense had its best performance of the season in Friday’s 7-1 win over the Phillies. The Marlins banged out six extra-base hits, including a triple and a double by Jesus Sanchez, who has light-tower power and is starting to emerge in his first full season in the majors.

“We’re looking for strikes in our comfort zones,” the 24-year-old Sanchez said.

Jesus Aguilar added three RBIs, and every Miami starter had at least one hit.

“That’s what we expect from this offense,” Marlins assistant coach James Rowson said after Friday’s win. “These are players who have a track record. It’s just a matter of finding their groove.”