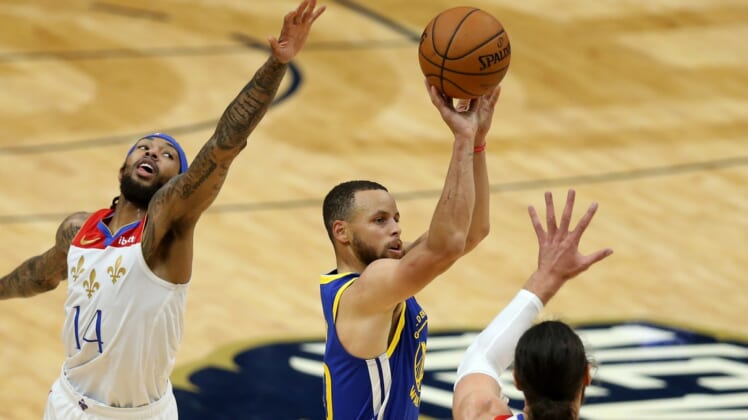 Lonzo Ball scored 33 points and Zion Williamson had a double-double as the host New Orleans Pelicans held off the Golden State Warriors 108-103 on Tuesday night.

Eric Bledsoe added 14 points, and Brandon Ingram scored 13 before being sidelined by a sprained ankle in the fourth quarter. Naji Marshall scored 10 off the bench.

One night after scoring 41 points, Steph Curry tallied 37 to lead the Warriors (33-33). But he recorded just two in the fourth quarter. Andrew Wiggins added 26 points and hit 5 of 10 3-pointers.

New Orleans scored the first four points of the fourth quarter to tie the score, but Wiggins answered with back-to-back 3-pointers.

Marshall made two free throws for the Pelicans before Wiggins hit a jumper and assisted on Juan Toscano-Anderson’s 3-pointer, which gave the Warriors a 90-81 lead.

Bledsoe had two assists and made a 3-pointer as New Orleans pulled even at 92.

Williamson assisted on four consecutive Pelicans baskets, the last of which was Bledsoe’s jumper that gave New Orleans a 100-98 lead with 1:30 left.

Draymond Green’s basket tied the score before Ball’s jumper put the Pelicans back on top with 26.2 seconds left.

Curry missed a 3-pointer and Mychal Mulder grabbed the offensive rebound, but Williamson made a steal and Green committed a clear-path foul.

Williamson and Ball each made two free throws for a six-point lead with 14.6 seconds left.

Curry’s 3-pointer started a 10-2 run that gave Golden State a 72-63 lead midway through the third quarter. Ingram and Ball each made a 3-pointer to pull New Orleans within 74-71.

The Pelicans got within a point but didn’t score in the final 2:45 as the Warriors took a 79-75 lead at the end of the third quarter.