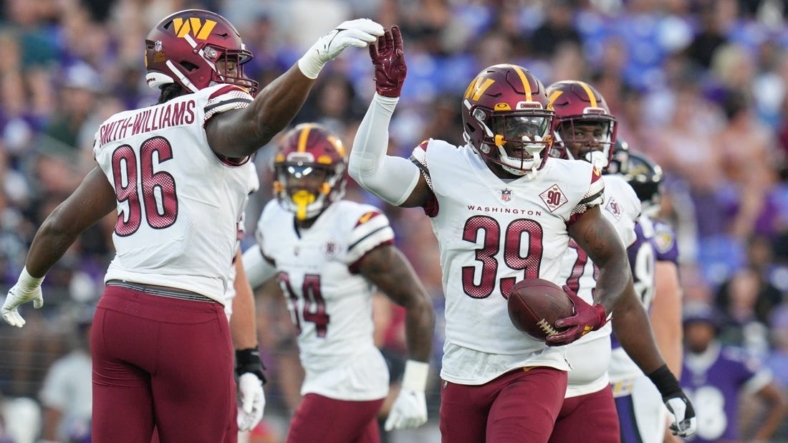 The Washington Commanders have a new nickname. The Jacksonville Jaguars have a new head coach. Both teams are looking to establish a new identity.

They’ll be seeking fresh starts and looking to leave the past behind when they meet on Sunday in Landover, Md.

“We’re back to football with real consequences,” Washington head coach Ron Rivera said. “You’re really finding out who’s stepping up. That’s what’s exciting because you want to see where you are.”

Where both teams have been has not been pretty. While Jacksonville has reached double-digit wins in just one of the last 14 seasons and went 3-14 last year, Washington has done it once in the last 16, with a 7-10 mark last season.

Over those periods, both teams have seen an erosion of support. Last year, Jacksonville and Washington ranked Nos. 30 and 31, respectively, in average attendance.

But hope springs eternal, especially when new faces arrive. For Jacksonville, that starts with coach Doug Pederson, who is five years removed from guiding the Philadelphia Eagles to a Super Bowl victory.

“You’re excited for getting to this point,” Pederson said. “Now is the fun time, the game planning, the scheming, the preparing for each week.”

Pederson is a key figure in one of the intriguing subplots on Sunday as he takes on his former quarterback Carson Wentz, who had much to do with getting the Eagles to Super Bowl LII before suffering a season-ending knee injury.

Like Pederson, Wentz is seeking a revival. Both were cast out of Philadelphia after the Eagles went 4-11-1 in 2020. After spending last season in Indianapolis, Wentz was traded by the Colts despite throwing for 27 touchdowns with just seven interceptions.

Pederson’s focus is on his own quarterback, Trevor Lawrence, who struggled last season after being picked No. 1 in the 2021 NFL Draft. After a season of documented dysfunction under coach Urban Meyer, Lawrence is excited about the Jaguars new direction.

“The culture has really flipped and that’s something that doesn’t happen overnight,” Lawrence said. “You can just feel it in the building, in the locker room, with the coaches, everything.”

Lawrence also is enthused about his re-tooled offensive line, now anchored by former Washington Pro Bowl guard Brandon Scherff. Travis Etienne, a first-round pick in 2021 who played with Lawrence at Clemson but missed last season with a foot injury, is ready to take over as the prime running back.

Another No. 1 overall pick, Georgia’s Travon Walker, will make his Jacksonville debut on Sunday on a linebacker crew that includes newly acquired Foyesade Oluokun, who had 192 tackles last year for Atlanta, the seventh most in a single season in NFL history.

In Washington, where pressure is mounting on third-year coach Rivera, the Commanders are counting on an offense that has plenty of weapons for Wentz to employ.

The wideout corps includes Terry McLaurin, first-round draft choice Jahan Dotson out of Penn State and Curtis Samuel, who appears healthy after a season ruined by a nagging groin pull that required surgery in the offseason.

The defense, guided by former Jags head coach Jack Del Rio, will be without 2020 No. 2 overall pick Chase Young, who is on the PUP list after ACL surgery. Another key defender, safety Kamren Curl (thumb), is listed as questionable.