5 Longest Golf Drives Ever: Where did Tiger Woods land on the list?

After existing as a pro sport for nearly a century, many fans wonder what are the longest golf drives ever. Although it is a game known for its finer nuances and technique, there are times when powerful drives and bad luck merge to create some historic moments.

With that in mind, here are the five individuals that blended sports and comedy to create the world’s longest golf drive records.

Dustin Johnson is the Mark McGwire of today’s current PGA tour when it comes to the longest golf ball shots. And he outdid himself in 2018 at an untelevised event in Texas when he unfurled a 489-yard drive that landed him on this unfortunate list. 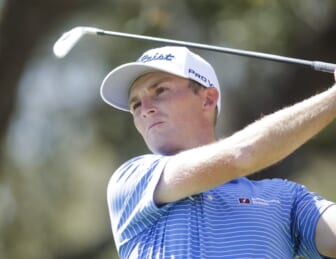 Johnson won none of his matches during a forgettable run in the tournament, but he left setting a course record and added another layer to his reputation as the big bopper of PGA tour driving distance in the modern era.

Even legends of the game have had moments of powerful drives gone awry. Tiger Woods’ landed on this list via one memorable stroke at the 2002 Mercedes Championship. When he unloaded with a 498-yard drive that careened off the green.

The Plantation Course in Kapalua, Hawaii has long been known as a place where drives can go to die. Especially with an assist from the winds of the Pacific. Woods had a taste of the frown-inducing powers of The Plantation 20 years ago.

Louis Oosthuizen earned a world-long drive at a round of golf in the 2013 Ballantine’s Championship. On an opening shot, his 500-yard drive landed on a hill, rolled down a cart path, then bounced along for over a minute before resting against a curb. 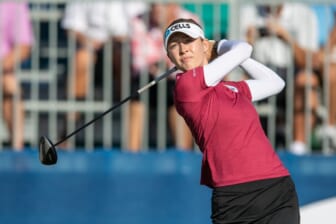 The footage of the drive (which can be viewed above) feels like something out of the film Caddyshack. The ball slowly works its way to an eventual stop down the path, as bystanders are unaware that an in-play ball sneaks right behind them and the event’s announcers giggle in amusement.

Mike Austin’s 1974 strike is recognized by Guinness as the official world record golf drive. And the historic shot had several unique elements to it. Firstly, the absurd 515 yards drive at the National Seniors Open Championship was made by a 64-year-old man with a wood driver. The old fella also had the aid of a 27 MPH wind at his back.

Related: What is the longest baseball game ever?

What adds a real level of hilarity to the record-setting shot, is that the hole was 455 yards away. Meaning the virile senior tour member missed his mark by 60 yards. He may not have been the winner of the championship that year, but he scored with fans that dig the long ball.

Carl Cooper had a disastrous start to the third hole of the 1992 Texas Open when he earned the unofficial longest drive ever. His blast towards the green bounced past the green, beyond the sixth tee, and eventually came to a stop behind the twelfth green. After the ball finally came to a halt, it set the all-time record for the longest drive at 787 yards.

Although the final number is disputed, Cooper has been immortalized in many fans’ eyes for hitting the longest PGA drive in the tour’s illustrious history. For a player that never logged a top-10 finish in his career, he will forever be remembered for his epic fail 30 years ago.