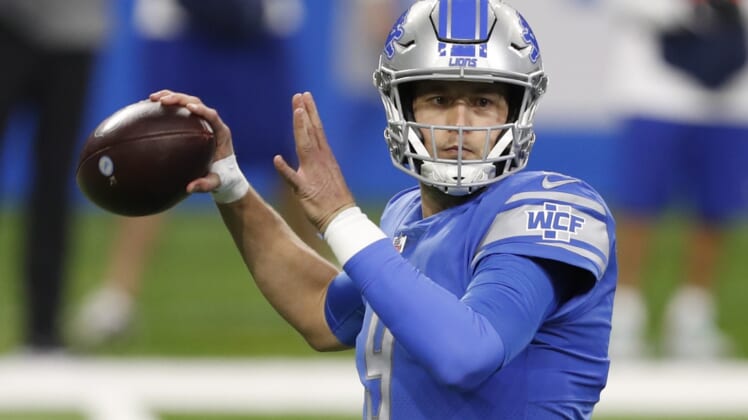 Quarterback Matthew Stafford and the Detroit Lions are likely to part ways during the offseason, with the team actively shopping their franchise quarterback on the trade market, according to numerous reports.

The Lions recently hired a new general manager in Brad Holmes and new coach Dan Campbell, so the time appears right to move on from Stafford, who has not led the team to an NFC North division title or a playoff victory in 12 seasons under center.

Stafford is expected to bring the Lions plenty of talent, which would include at least a first-round pick in return, ESPN and NFL Network reported.

Stafford, who turns 33 in February, has two years remaining on a team-friendly deal that is due to pay him a combined $43 million — $20 million this year and $23 million next year.

Stafford started all 16 games and threw for 4,084 yards with 26 touchdowns and 10 interceptions last season, despite playing through rib, right thumb, ankle and neck injuries. None of the injuries are expected to require surgery.

If Stafford is traded, it likely would occur before the fifth day of the 2021 league year in March, when he’s due a $10 million roster bonus. Detroit would carry $19 million in dead money on their salary cap in 2021, but a trade would yield a savings of $14 million in cap space and $20 million in cash at a time the NFL’s salary cap is expected to decrease, NFL Network reported.

The teams that may be in the market for a quarterback include the Washington Football Team, Broncos, Colts, Panthers, Patriots and Saints.

He led the Lions to the postseason three times, most recently in 2016, when Detroit went 9-7 before losing to Seattle in the wild-card round.