Lightning looking to get their mojo back in Motown 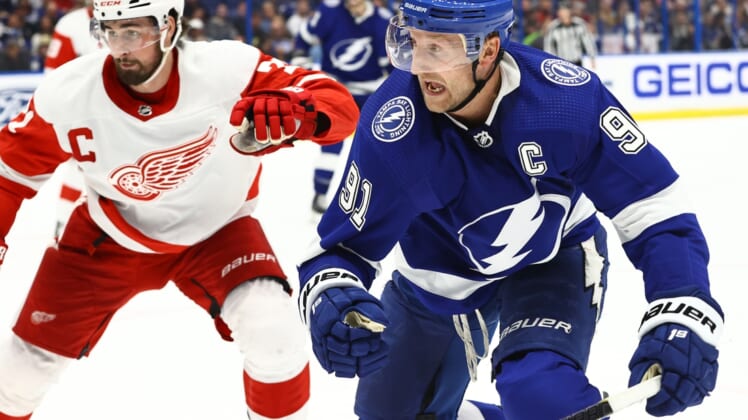 The Tampa Bay Lightning are seeking a Stanley Cup three-peat, but this month, bad things that have come in threes.

They had a three-game losing streak earlier this month and now they’re trying to end another one as they head to Detroit for a Saturday matinee.

The two-time defending champions have lost each of their past three games by a single goal. Boston rallied to defeat them 3-2 Thursday.

Team captain Steven Stamkos admitted that the team has been shaken by the slump. The Lightning’s latest loss has dropped them into fourth place in the Atlantic Division standings. They entered Friday eight points behind first-place Florida and one point below Toronto and Boston.

“It’s the toughest thing to get back in the world, in any facet of the world is confidence,” Stamkos said. “It’s such a fickle word and something that people take for granted, I think. When you have it, it’s great, but it goes away pretty quick, and you have to grind and battle and not cheat the game to get it back. That’s what we’ll look to do.”

While losing six of their last eight, the usually high-octane Lightning have scored just 17 goals.

A date with the Red Wings might just cure their ills. The Lightning are 22-2-2 against Detroit, dating to the 2015-16 season.

Detroit is 2-7-1 over its last 10 games. Following a Tuesday home win against Philadelphia, the Wings lost to the New York Islanders, 5-2, on the road Thursday.

“It is frustrating, not being able to string some (victories) together,” Detroit first-line center Dylan Larkin said. “We have guys out of the lineup but we have to find a way to start getting on a roll.”

The Islanders took the lead nine seconds into the game and the Red Wings didn’t score until New York had a 4-0 third-period lead.

“We didn’t start well and we didn’t have enough offensive zone time until the second and third periods,” Larkin said. “It’s a team that likes to play at home and you have to be better at the start. It’s an unfortunate play to start and we’re down 1-0 nine seconds in, but we have to find a way to make it 1-1.”

Both teams are playing the first game of a back-to-back. Tampa Bay faces the Islanders on Sunday while Detroit plays in Pittsburgh.