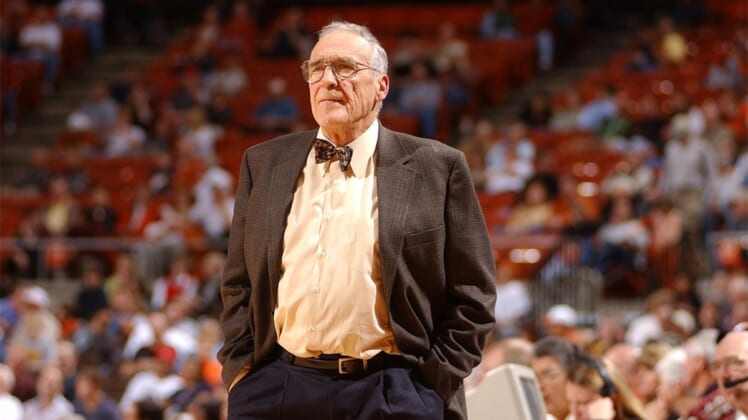 Longtime Mount St. Mary’s head basketball coach Jim Phelan passed away in his sleep at home, the school announced Wednesday. He was 92.

Known for his ever-present bow tie, Phelan won 830 games during his 49-season career at Mount St. Mary’s from 1954-2003. Phelan coached the school to a 58-57 win over Sacramento State in the 1962 Division II national championship, and later guided Mount through the transition into a Division I program.

We are deeply saddened to share that legendary @MountHoops coach Jim Phelan passed away peacefully in his sleep at home last night.

You will be greatly missed Coach! pic.twitter.com/rNyZXXpYno

The Mount’s basketball court at Knott Arena is named after Phelan.

“It is with sincere sadness that I share that Coach Phelan, our legend, has passed away,” Mount St. Mary’s current coach Dan Engelstad said in a statement. “… I thought about how fortunate I am to coach at the place that Coach Phelan built and grateful that he built it on family. I get to share his desk and I get to coach in the gym that he changed lives in — what an honor.”

A statement from Head Coach Dan Engelstad on the passing of Coach Jim Phelan: pic.twitter.com/4ysaqkmTmu

Phelan, who ranks 18th on the NCAA all-time wins list, was inducted into the National Collegiate Basketball Hall of Fame in 2008. He played at La Salle and spent one season with the Philadelphia Warriors (1953-54) before turning to a career in coaching.