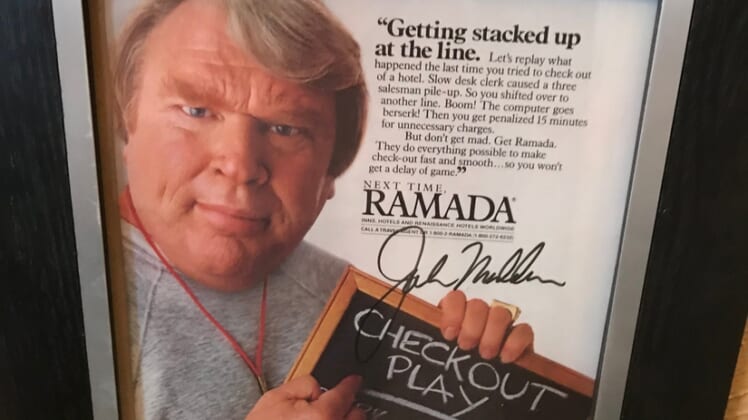 Among the sports memorabilia at the Timeline sale is a John Madden autographed Ramada advertisement.Img 8200

Hall of Fame coach and broadcasting icon John Madden died on Tuesday, according to the NFL. He was 85.

“On behalf of the entire NFL family, we extend our condolences to Virginia, Mike, Joe and their families,” said NFL Commissioner Roger Goodell, referring to Madden’s wife and two sons. “We all know him as the Hall of Fame coach of the Oakland Raiders and broadcaster who worked for every major network, but more than anything, he was a devoted husband, father and grandfather.

“Nobody loved football more than Coach. He was football. He was an incredible sounding board to me and so many others. There will never be another John Madden, and we will forever be indebted to him for all he did to make football and the NFL what it is today.”

Madden won Super Bowl XI with the then-Oakland Raiders when they rolled through the 1976 regular season with a 13-1 record. The team won three postseason games, including a convincing 32-14 victory over the Minnesota Vikings in the Super Bowl.

Madden was inducted into the Pro Football Hall of Fame in 2006.

Madden also was heavily involved in the Madden football video games, published by EA Sports since 1988.

The NFL said it will announce memorial service information when it is available.