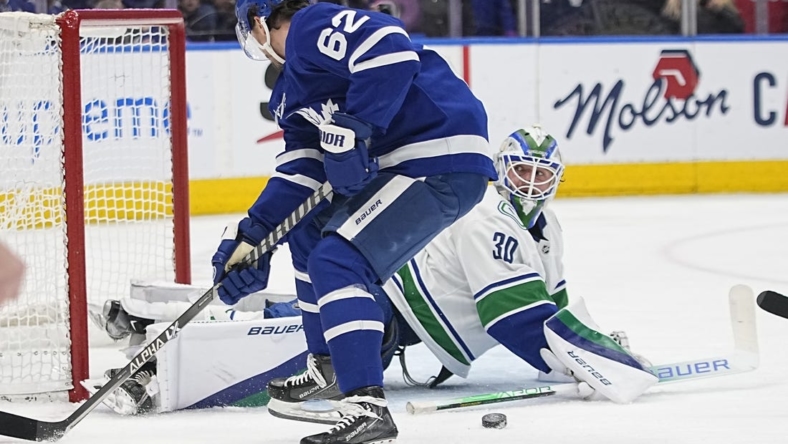 The Toronto Maple Leafs scored three unanswered goals in the second period to come back and defeat the visiting Vancouver Canucks 3-2 Saturday night.

Erik Kallgren made 28 saves in his second start in as many nights. Toronto lost 4-2 to the Pittsburgh Penguins on Friday.

Bo Horvat and J.T. Miller scored for the Canucks, who have lost two in a row and are 1-2-0 on their five-game road trip. Spencer Martin stopped 32 shots.

Vancouver led 2-0 after the first period.

Miller scored his eighth goal of the season on a shot from above the left circle at 12:11 during a power play. Quinn Hughes and Brock Boeser assisted. Michael Bunting was off for interference.

Vancouver had nine shots on goal in the first period, while the Leafs had 10.

Toronto took a 3-2 lead in the second period.

Matthews scored his seventh goal of the season on a power play at 1:46 on a 32-foot wrist shot. Mitchell Marner and John Tavares assisted. Hughes was off for hooking.

Engvall scored his second goal of the season at 6:27 from nine feet after Martin lost his goal stick. Calle Jarnkrok and Mark Giordano tallied helpers.

Benn, playing his first game this season, scored at 10:01 on a rebound from the end boards after Morgan Rielly’s wide shot. William Nylander also assisted.

Toronto led 27-19 in shots on goal after two periods.

Boeser hit a goal post at 2:02 of the third period during a Vancouver power play.

The Canucks went on the power play at 14:26 of the third period, but the Maple Leafs were able to hold them off.

Martin came out for an extra attacker with under two minutes left in the third.

There was a pregame tribute to former Maple Leafs defenseman Borje Salming, who has ALS and is attending the games during Hall of Fame weekend.