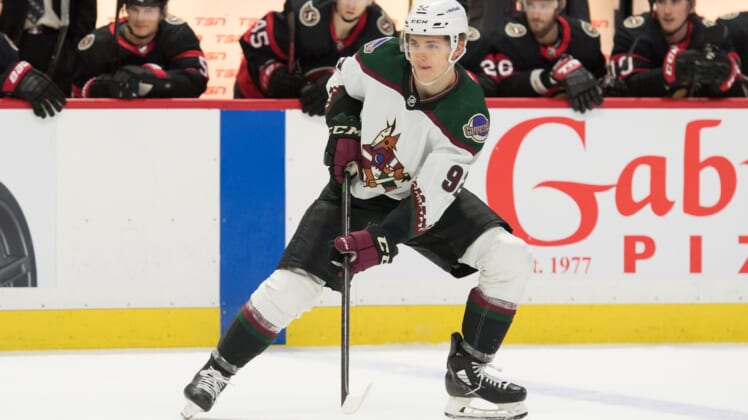 Lawson Crouse recorded his first career hat trick and Nick Schmaltz scored the go-ahead goal at 7:46 of the third period to fuel the visiting Arizona Coyotes to a 5-3 victory over the Ottawa Senators on Monday.

Crouse scored with the teams at even strength and then with the Coyotes on the power play and short-handed, and Scott Wedgewood made 40 saves. The Coyotes have won five of their last six games, and they also capped a season sweep of Ottawa, having won 8-5 on March 5 in Glendale, Ariz.

Josh Norris scored two goals and Connor Brown also tallied for the Senators, who have lost seven of their last nine games.

Brown cleaned up a loose puck at the doorstep to forge a 3-3 tie at 7:30 of the third period before Schmaltz answered 16 seconds later.

Schmaltz, who recorded a franchise-record seven points in the previous game against Ottawa, backhanded the puck past Gustavsson to regain the lead for Arizona. It was Schmaltz’s 17th goal of the season, and it extended his point streak to a career high-tying six games (six goals, nine assists), a run that was initially set from Oct. 10-22, 2019.

Barrett Hayton effectively sealed the win by scoring into the empty net from center ice with 48 seconds remaining.

Norris opened the scoring at 2:39 of the first period before Crouse countered by scoring two goals in 71 seconds.

Crouse converted a 2-on-1 rush with Phil Kessel at 7:49 before a cross-checking penalty on Senators captain Brady Tkachuk sent Arizona to the power play at 8:45. The Coyotes needed just 15 seconds to cash in, with Crouse extending his stick to deftly deflect defenseman Shane Gostisbehere’s shot past Gustavsson.

Norris leveled the contest just over five minutes later after his shot from the right circle beat Wedgewood for his team-leading 24th goal of the season.

With Nick Ritchie serving a roughing penalty, Crouse scored his career-high 18th goal of the season to give Arizona a 3-2 lead at 16:12 of the third period.

Crouse alertly tapped the puck past Ottawa defenseman Thomas Chabot to set up his breakaway bid. He then used his body to fend off Norris before wristing a shot past Gustavsson inside the right post.