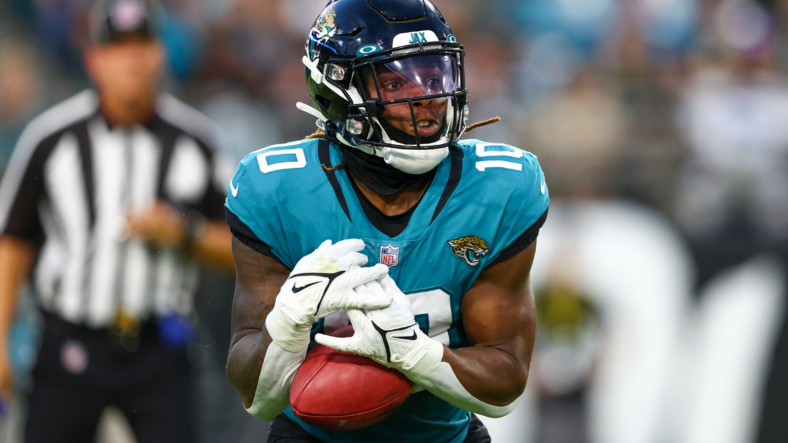 It wasn’t too long ago that former Colorado star Laviska Shenault was considered one of the best young wide receivers in the NFL. Back in 2020, the Jacksonville Jaguars made him the No. 42 overall pick in the NFL Draft with the expectation that the 6-foot-1 pass-catcher would be able to make a difference.

Now, Shenault will be on the receiving end of passes from Baker Mayfield with the Carolina Panthers. In what has to be considered a surprising move, Jacksonville has traded the 23-year-old receiver to Carolina.

To be clear. Shenault struggled with drops and fumbles during the preseason slate. In fact, he muffed a punt in a preseason outing against the Pittsburgh Steelers and seemed to be falling out of favor under first-year head coach Doug Pederson. Even then, moving off a talented young receiver is not something a rebuilding club typically does.

Related: Surprise NFL cuts we could see this week

Shenault’s catch rate is what’s most intriguing here given the struggle of Jacksonville’s quarterbacks with accuracy over the past two seasons. He’ll now be on the receiving end of bombs from a quarterback in Mayfield who boasts a career 62% completion percentage and has shown improvement on intermediate routes.

As for Trevor Lawrence and the Jaguars, they’ll now rely on Christian Kirk, Zay Jones and Marvin Jones Jr. to be the top receivers heading into Week 1 against the Washington Commanders. Young running back Travis Etienne also figures to be a receiving threat after the former first-round pick missed his entire rookie season to injury.