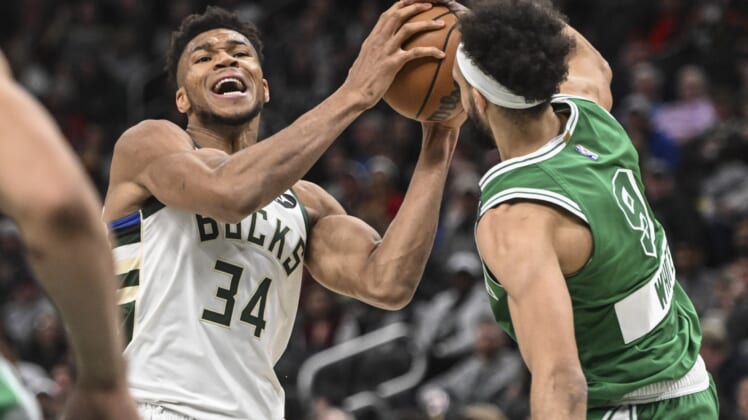 Giannis Antetokounmpo and Jrue Holiday both scored 29 points as the Milwaukee Bucks moved a half-game ahead of the visiting Boston Celtics for second place in the Eastern Conference with a 127-121 win on Thursday.

Milwaukee (50-30) led much of the way thanks to advantages of 58-34 for points in the paint, 14-5 on second-chance points and 19-9 on fastbreaks — a byproduct of the Bucks forcing the Celtics into 15 turnovers.

The Celtics’ Marcus Smart stepped up with teammate Jayson Tatum (knee) on the sideline, scoring 19 of his 29 points in the second half. Smart shot 7 of 12 from 3-point range.

Milwaukee held Boston scoreless the rest of the way.

Bobby Portis (17 points) delivered a 3-pointer at the 2:11 mark on the last of Holiday’s eight assists, tying the score at 121.

Antetokounmpo split a pair of free throws to put Milwaukee ahead with 1:31 left, and Holiday’s tip-in with a minute remaining increased the gap to three.

After a lengthy delay while officials reviewed if a missed 3-point attempt by Boston’s Jaylen Brown drew rim, the Celtics’ Daniel Theis missed a wide-open look at the rim. Antetokounmpo added another free throw, and then George Hill punctuated Milwaukee’s final home game of the regular season with a strip of Brown and fastbreak bucket on the other end.

Brown recorded a triple-double of 22 points, 11 assists and 10 rebounds, while Theis added another 22 points in the loss.

Milwaukee is now in the driver’s seat for the No. 2 seed with road games remaining Friday at Detroit and Sunday at Cleveland. Boston, up by a half-game on the Philadelphia 76ers (49-31), ends its regular season on Sunday in Memphis.