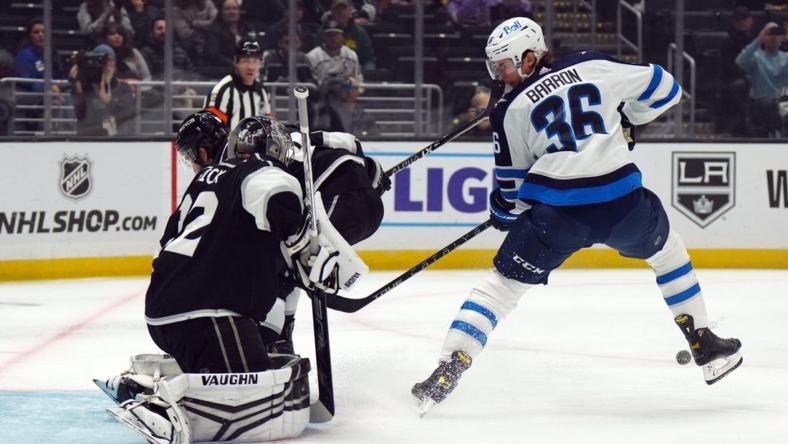 Axel Jonsson-Fjallby and Blake Wheeler scored in the final six minutes to lift the visiting Winnipeg Jets to a 6-4 win against the Los Angeles Kings on Thursday.

Adam Lowry had a goal and an assist, Mark Scheifele, Pierre-Luc Dubois and Nate Schmidt also scored and Morgan Barron had two assists for the Jets, who have won two in a row for the first time this season. Connor Hellebuyck made 40 saves for the victory.

Trevor Moore had a goal and an assist, Arthur Kaliyev, Blake Lizotte and Gabriel Vilardi also scored and Jonathan Quick made 13 saves for the Kings. Los Angeles was unable to build on its 4-2 win against the visiting Tampa Bay Lightning on Tuesday.

Jonsson-Fjallby deflected Brenden Dillon’s point shot into the net with 5:37 left to give Winnipeg a 5-4 lead.

Wheeler scored into an empty net with 40.8 seconds remaining to cap the scoring.

Moore had scored off a breakaway following a turnover to tie the score 4-4 at 4:45 of the third period.

Scheifele converted a breakaway off a turnover in the Los Angeles zone to give the Jets a 1-0 lead at 5:03 of the first period, but the Kings came back with three straight goals over the next 9 1/2 minutes.

Kaliyev tied it 1-1 with a power-play goal at 9:47, scoring with a wrist shot from the right circle off a rush.

The Kings moved ahead 2-1 at 10:53. Lizotte got to a loose puck near the right post and pushed it past Hellebuyck’s outstretched right skate.

Vilardi made it 3-1 at 14:33 when he tipped in a shot from Kevin Fiala for his sixth goal of the season.

The Kings were still outshooting the Jets 16-1 with five minutes left in the first period when Lowry scored short-handed to make it 3-2 at 18:08.

Dubois tied it 3-3 with a power-play goal at 16:04 of the second period. He took a pass to the side of the net, moved a step closer and scored from in close.

Schmidt scored on a long wrist shot from the high slot to give the Jets a 4-3 lead at 18:55 of the second.

The Jets scored four goals on 14 shots through the first two periods.