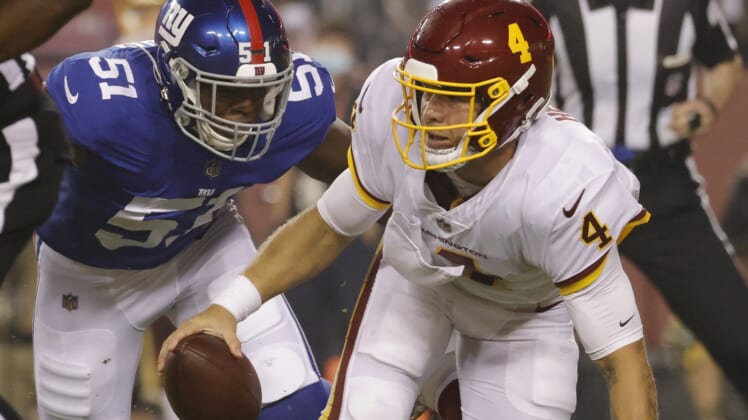 Dustin Hopkins kicked a 43-yard field goal with no time remaining to give the Washington Football Team a 30-29 victory over the New York Giants on Thursday night in Landover, Md.

Hopkins first missed wide right from 48 yards, but the Giants’ Dexter Lawrence was called offside to give the kicker a second chance. Hopkins booted the second attempt through the uprights as Washington (1-1) ended a string of five straight losses to the Giants (0-2).

Graham Gano kicked a 35-yard field goal with two minutes left to cap a 5-for-5 performance and give New York a 29-27 edge. Gano also was successful from 23, 47, 52 and 55 yards to increase his franchise record to 35 consecutive made field goals.

Taylor Heinicke passed for 336 yards, two touchdowns and one interception in his second career regular-season start, his first for Washington. Terry McLaurin had 11 receptions for 101 yards and one touchdown, Ricky Seals-Jones caught a scoring pass and J.D. McKissic rushed for a score.

Daniel Jones passed for 249 yards and one touchdown and also rushed for 95 yards and a score for the Giants. Saquon Barkley ran for 57 yards on 13 carries in his second game since major knee surgery, and Darius Slayton caught a touchdown pass for New York, which was outgained 401 yards to 387.

Washington trailed by six before moving 75 yards on two plays to take a 27-26 lead. Heinecke hit McKissic on a 56-yard pass play and followed with a 19-yard dart to Seals-Jones in the right corner of the end zone to put Washington ahead with 4:33 remaining.

The Giants trailed 14-10 at halftime before scoring 10 third-quarter points to move ahead.

Hopkins drilled a 49-yarder with 1:30 left in the third quarter to pull Washington within three before Gano kicked a 52-yarder through to make it 23-17 with 13:35 remaining in the game.

Hopkins kicked a 37-yard field goal with 8:46 left to cut the New York lead to three.

The Giants had a chance to add to make it a two-score lead, but a wide-open Slayton dropped a potential 43-yard touchdown pass from Jones with 6:18 remaining. New York salvaged three points when Gano kicked a 55-yarder to make it 26-20 with 4:50 left.

Washington led by four at the half thanks to McKissic’s 2-yard run with 21 seconds to play.