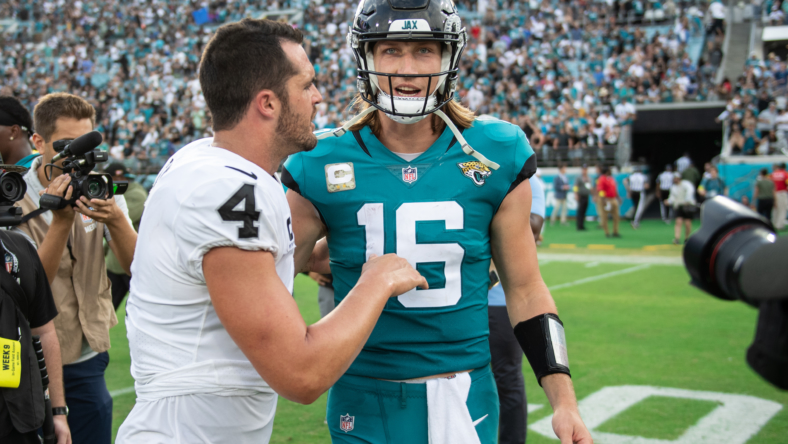 For the third time the season, the Las Vegas Raiders blew a 17-plus point lead and lost 27-20 to the Jacksonville Jaguars on Sunday at TIAA Bank Field.

The Raiders (2-6) were shutout in the second half after having a lead as large as 17-0 just before halftime.

“It’s not good enough,” McDaniels said after the game. “We’ve got to coach better in those situations. We have to avoid feeling like the situation is okay.”

Here are 5 takeaways from the Raiders’ game on Sunday afternoon.

A tale of two halves for the Las Vegas Raiders

The Raiders opened the game as if they bounced back, looking to avenge last week’s 24-0 shutout loss with a memorable first half.

The Fresno State duo lit it up in the first half as both of Carr’s touchdown passes went to Adams.

On the team’s second drive after defensive end Maxx Crosby recovered a fumble, Carr found Adams for 25 yards on the 10th play of the drive to open the scoring.

After a Daniel Carlson 38-yard field goal, Carr once again found Adams on the next offensive possession for a 38-yard touchdown catch in a drive that lasted three plays.

But when the second half came around, the Raiders returned to their negative ways.

Carr, who completed 21-of-36 of his passes for 259 yards and two touchdowns on Sunday, only found Adams one more time in the final 30 minutes and the Raiders could not even get into field goal range to put points on the board for Carlson, who continued of streak of consecutive field goals made with two more on Sunday.

All season long, Las Vegas has struggled to have its best all-around team performance for 60 minutes despite the players and the experience this roster has.

“We had a solid first half, some things you could do better, but we did put ourselves in a decent position moving into the second half,” Adams said after the game. “And then, we basically fell apart. It’s frustrating because aint no way we should be losing game at the rate that we are, let alone the way that we are.”

With Adams amassing 100 receiving yards in the first half alone, the Raiders have to be able to find the production in the final 30 minutes.

Adams had one reception on eight targets in the third and fourth quarters combined shows that they were opportunities.

“We were calling certain things for him and they doubled him on some plays, too,” Carr said after the game. “Obviously if not, he would have nine more catches. So, it gives opportunities for other guys and the timing of that matters.”

When the season began with the addition of EDGE rusher Chandler Jones to compliment Crosby, the expectation was both were going to benefit off of each other, in terms of putting up the numbers in the sacks and tackles for loss categories.

However, no one on the defense was able to sack Jaguars quarterback Trevor Lawrence.

The Jaguars combined to record 403 yards of offense and it did not help when linebacker Divine Deablo came out early in the game due to a forearm strain. As a result, Blake Martinez filled in his role and recorded a game-high 11 tackles.

However, Lawrence, who completed 25-of-31 passes for 235 yards and a touchdown, was able to find holes within the Raiders defense both in the run and pass game.

The momentum in the game was really evident in the third downs category.

By completing 25% offensively and allowing 60% on third downs defensively shows how much both sides are unable to make plays, either on third down or leading to third down.

Not being able to advance the ball offensively and get the stops when the Silver and Black need to has affected them over the last few weeks.

“It felt like we were in third and long the entire day,” McDaniels said. “We’ve got to be able to be more productive on first and second down, whether it is the running game or the passing game.”

Up next for the Las Vegas Raiders

The Las Vegas Raiders return home Sunday afternoon to the friendly confines of Las Vegas as they prepare to take on the Indianapolis Colts on Nov. 13 at 1:05 p.m. before going back on the road for a two-game west coast road trip in Denver and Seattle to close the month of November.

Las Vegas needs to figure out how to translate positive execution in practice this coming week and be able to take that into Sunday’s game against Colts inside Allegiant Stadium.