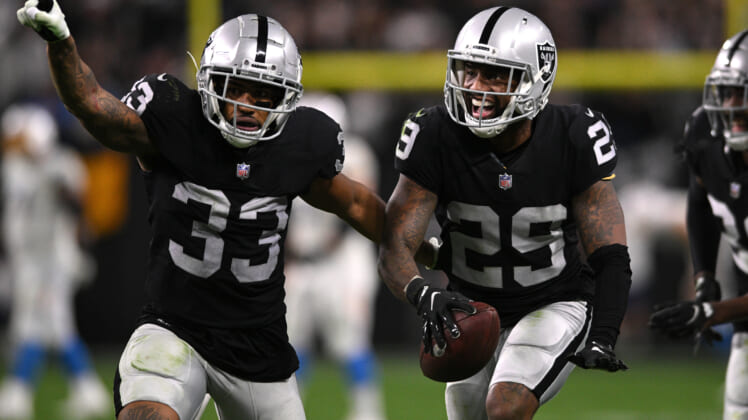 What the Las Vegas Raiders have been through here this season is just almost too surreal. It started with then-coach Jon Gruden having to resign after an email scandal painted him in a bad light.

Then, a little bit later, star wide receiver and 2020 first-round pick Henry Ruggs was released by the Raiders after being involved in a deadly car accident in Vegas. Ruggs was allegedly drunk at the time, killing a young woman and her dog in the process.

Teams go through off-field issues. It’s part of the modern NFL. However, it’s rare that we see a team like the Las Vegas Raiders overcome these problems to win 10 games and earn a playoff appearance.

That’s exactly what we’re seeing in Sin City. These Raiders were hosting the division-rival Los Angeles Chargers at Allegiant Stadium in Las Vegas Sunday night. It was a must-win game for the Raiders, with the victorious team punching its ticket to the NFL Playoffs.

With 65,000 fans in attendance, the Raiders shocked everyone by coming out on top. The final score of 35-32 in overtime doesn’t do this game justice.

It came down to a 47-yard field goal attempts by Raiders kicker Daniel Carlson with just two seconds remaining in overtime.

The entire NFL world was watching, including Ben Roethlisberger and the Pittsburgh Steelers. A win by either the Chargers or Raiders would have sent Pittsburgh to the playoffs. A tie would have ended Big Ben’s career.

Just when it seemed like the Raiders were going to play for a tie, Chargers head coach Brandon Staley called a timeout with 38 seconds left and Las Vegas having the ball at the Los Angeles 38.

That’s when the Raiders ran the ball for a first down, setting up the game-winning field goal.

By virtue of this kick and the Raiders win, they’ll now take on the Cincinnati Bengals in the AFC Wildcard Playoffs next weekend.

As for Los Angeles, it represents a bitter end to a game in which the team overcame a 15-point fourth-quarter deficit to force overtime.

As noted above, Staley opted to call a timeout with 38 seconds remaining in overtime. It sure did seem like Las Vegas was going for the tie, which would have led to a Chargers playoff spot. Instead, said timeout made the Raiders rethink their decision-making process. It led a Los Angeles loss and another non-playoff campaign.