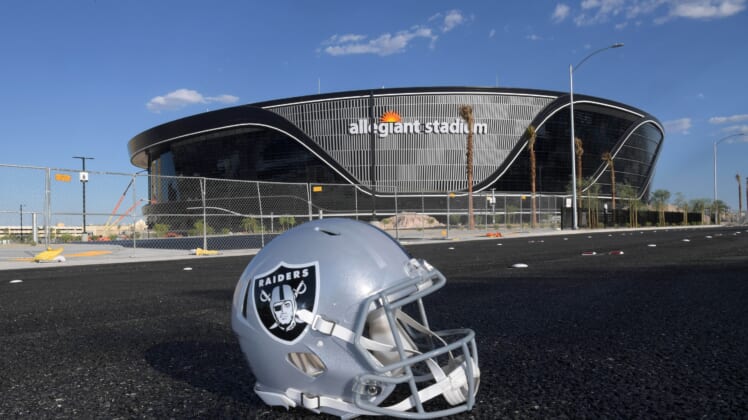 May 29, 2020; Las Vegas, Nevada, USA; General overall view of Las Vegas Raiders helmet at the Allegiant Stadium construction site. The stadium will be the home of the Las Vegas Raiders and the UNLV Rebels football teams. It is located on about 62 acres of land west of Mandalay Bay at Russell Road and Hacienda Avenue and between Polaris Avenue and Dean Martin Drive, just west of Interstate 15. Construction of the $1.8 billion stadium began on September 18, 2017 and is expected to be completed on July 31, 2020, in time for the 2020 NFL season and the 2020 NCAA season. Allegiant Stadium will serve as site of the Las Vegas Bowl beginning in 2020, which will feature a Pac-12 football opponent versus either a Big Ten or SEC opponent, as well as the 2020 and 2021 Pac-12 Football Championship Game. Mandatory Credit: Kirby Lee-USA TODAY Sports

The Las Vegas Raiders took massive action before the 2020 NFL season by banning fan attendance at Allegiant Stadium this year due to the COVID-19 pandemic. While playing in an empty stadium might have some impact on the players, the fallout will be dramatically worse for the organization.

Heading into a season where the NFL anticipates losing billions of dollars in revenue with either empty stadiums or significantly reduced crowds, the Raiders could take the hardest hit of the COVID-19 pandemic’s economic fallout.

Raiders could lose $571 million without fans in Allegiant Stadium

The decision not to allow fans inside the state-of-the-art Allegiant Stadium wasn’t an easy one for the organization. However, while many clubs have adapted to socially-distant seating and reduced stadium capacities, owner Mark Davis rejected the idea.

Months before the team even considered banning fans, it sold out all its tickets for the 2020 season. With the team now allowing fans to seek full refunds, the scope of the financial loss is staggering.

According to data compiled by ticket search engine site TicketIQ, the Raiders will suffer an estimated loss of $571 million in ticket market value loss for the 2020 season. It is the highest mark in the NFL and is especially crushing for a team seeking to build a fan base in Las Vegas that it can keep for years to come.

The lost revenue could be especially damaging for the Raiders given where the NFL is headed next offseason because of the COVID-19 pandemic. The NFL and NFL Players Association agreed to set the salary cap floor at $175 million, which would be a huge drop from this season’s $198.2 million cap.

It’s possible the salary cap increases slightly from the set floor next year if the league doesn’t lose as much revenue as it anticipated. But there is still no guarantee that a full 16-game season and the NFL Playoffs will be completed.

For a team that is currently scheduled to have $185 million in total cap liabilities next year, per OvertheCap, very difficult decisions might need to be made. If that happens, it could lead to the Raiders parting ways with key talent and their on-field product getting worse.

The latest news and developments on the Las Vegas Raiders and Allegiant Stadium can be found here.