4 keys to Las Vegas Raiders win against the Cleveland Browns 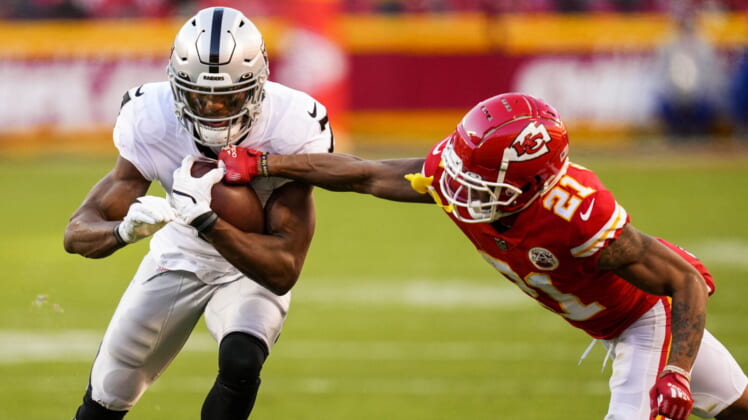 The Las Vegas Raiders are back on the road to complete the two-game road trip at FirstEnergy Stadium in an AFC clash against the Cleveland Browns on Monday afternoon at 2 p.m. PST. The game was originally scheduled for Dec. 18 at 1:30 p.m. PST but is postponed due to a high number of positive COVID-19 tests within the Browns organization.

These two teams met last year in Cleveland and the Raiders won 16-6 with kicker Daniel Carlson netting three field goals and a Las Vegas offense that had the ball for 37 minutes.

It’s been a fluid season for the Las Vegas Raiders

That is no different this week.

Although the Raiders are not currently dealing with any COVID-19 issues, their opponent is.

In total as of Dec. 17, 24 players from Cleveland are on the team’s COVID-19 reserve list, in addition to head coach Kevin Stefanski. These players and Stefanski either tested positive this week or prior to their Week 14 game against Baltimore, including quarterbacks Baker Mayfield and Case Keenum.

With the postponement, it gives Mayfield or Keenum the chance to start on Monday if they are able to return. If both are unable to return, expect Nick Mullens to get the start.

In addition to the two quarterbacks, wide receiver Jarvis Landry tested positive and his backup, Anthony Schwartz is also sidelined being in the concussion protocol. If Landry and Schwartz are unable to play, the Browns will rely on Donovan Peoples-Jones and Rashard Higgins as the top two options in the passing game.

One player that has remained injury-free and coronavirus-free this week is running back Nick Chubb, who currently ranks fifth in the NFL with 926 rushing yards. The Raiders defense has to watch for Chubb as he will be one of the primary options, both in the run game and in the passing game.

With Kareem Hunt already sidelined due to an ankle injury, he was also placed on Cleveland’s COVID-19 reserve list on Friday. As a result, Las Vegas will also need to watch for D’Ernest Johnson, who will back up Chubb.

Interim head coach Rich Bisaccia said this is not the first time the Browns have gone through this issue and still found a way to get a victory.

“If you look at last year, they had a COVID issue the last game of the season,” Bisaccia said Thursday. “They had coaches with COVID. They had players with COVID. The went into Pittsburgh and had to have the win to get into the playoffs. They beat Pittsburgh in Pittsburgh. They won the game and won a playoff game.

Last week, the magic number was 300 for quarterback Derek Carr’s passing yard total in a game. In addition, 17 is for the number of points Las Vegas needs to get to increase their chances of winning on Monday.

When the Raiders score less than 17 points this season, they are 0-7. In Las Vegas’ six wins, they have averaged 32 points per game, including 26 as its lowest number of points in a Week 2 victory on the road against the Steelers.

The Raiders need to find a way to get wide receiver Hunter Renfrow the ball in addition to getting him in the end zone multiple times.

Over Renfrow’s last three games, his reception and target totals have increased as the 25-year-old has recorded 30 catches on 33 targets for 353 yards and a touchdown during that span.

Running back Josh Jacobs begins his second week as the Raiders’ primary rusher since Kenyan Drake suffered a season-ending ankle injury against Washington.

Now, Jacobs will be tested as the Browns defense is led by defensive end Myles Garrett who was the former No. 1 overall pick in 2017.

The biggest thing surrounding the run game is confidence between the offensive line and Jacobs, in addition to Carr.

“Big trust issues for everyone, whether it be the quarterback in trusting they’ll get it done and I can get through my reads and my progression,” offensive coordinator Greg Olson said. “And it’s no different than with a running back. You’ve got to trust to stay with my read and not try to do too much or go beyond what the read is asking me to do.

“That’s sometimes comes into effect with both the quarterbacks and running backs is the trust of what’s going on up front. They have to trust one another and stick with.”

So far this season, Garrett has recorded 15 sacks, which ranks second in the NFL.

Olson said Garrett is one of the top defenders in the league as the two-time Pro Bowler leads a Cleveland defense that ranks 11th in the NFL with 106.2 rushing yards allowed per game.

“He’s a premiere player in the league and has been, but he’s really having a great season,” Olson said of Garrett. “That’s their strength, their front seven and they’re real solid in the back end as well. So, not a lot of holes in that defense right now, but we’ll adjust with those front four guys as the game gets going where they decide to place them.”

Weather to be a factor for Las Vegas Raiders

Like last year, weather will play a difference, although not as much.

Rain, wind and sleet dominated last year’s game as it was on full display when Carlson attempted his first field goal of the game. Carlson aimed and kicked his ball to the right, but the wind pushed it left and hit off the left upright.

With the postponement, forecasts for Monday are predicting partly cloudy skies with temperatures in the 40s, and 30s after the sun goes down. There will also be winds reaching 20 miles per hour.

Bisaccia said Carlson and punter AJ Cole will test out their kicks and debate what distances they can make field goals based on the weather before kickoff.

“We get to kick on both ends and then Daniel and AJ get a feel for ‘we can kick a field goal from 53, from 52’ or ‘we can’t kick a PAT today,” Bisaccia said. “You come out of pregame and get a feel for how the wind is. Do you want to take the wind? Do you want to take the ball? It has a little bit to do with how you start the game as well because it’ll have to do with how you end the game if you win the coin toss.

“It is a pregame decision as to what factor the wind is going to play and then hope it doesn’t change at halftime.”

The game kicks off Monday afternoon and will be televised on NFL Network.