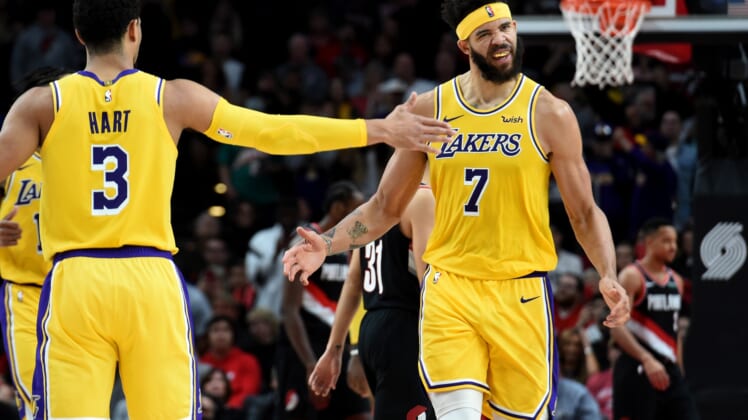 Nov 3, 2018; Portland, OR, USA; Los Angeles Lakers center JaVale McGee (7) celebrates with teammate guard Josh Hart (3) after scoring a basket late during the second half of the game at the Moda Center. The Lakers won the game 114-110. Mandatory Credit: Steve Dykes-USA TODAY Sports

Some criminals raided the Southern California home of Los Angeles Lakers center JaVale McGee this past weekend, per TMZ Sports.

The report notes that McGee had everything from his championship ring dating back to the big man’s Golden State Warriors days to the goggles he used to celebrate said title stolen from him.

“We’re told the thieves stole TWO safes from the home which contained at least $200k in cash and jewelry — including one of the two rings McGee won during his stint with the Golden State Warriors. Unclear which ring was taken,” the report read.

As TMZ Sports notes, this is the latest in a string of burglaries that have plagued sports figures in Southern California recently. That list includes former Los Angeles Dodgers star Yasiel Puig and Robert Woods of the NFL’s Los Angeles Rams.

Authorities in the area indicate that they have no suspects in custody and continue to investigate the incident.