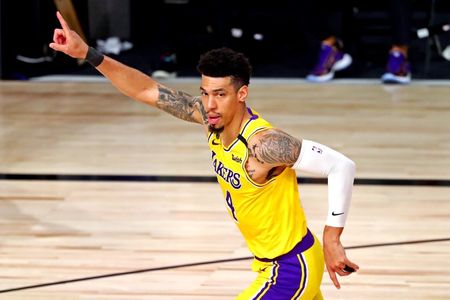 Lakers guard Danny Green revealed Sunday that he and his fiancee received death threats after he missed a shot that could have returned the NBA title to Los Angeles.

“It’s just a basketball game at the end of the day and they’re taking out their emotions and they need someone to blame. It came down to the last play and of course I’m the easy target,” said Green, an 11-year NBA veteran who has won championships with the San Antonio Spurs and Toronto Raptors.

Green had an open look from 25 feet in Game 5 of the NBA Finals on Friday night, but his shot with 7.1 seconds left fell short. The Miami Heat won 111-108, and the Lakers lead the best-of-seven series 3-2 heading into Sunday night’s Game 6.

He said his fiancee, Blair Bashen, alerted him to the threats made via social media.

“Didn’t faze me, didn’t care, just ignore it,” Green said. “Those people’s opinions don’t matter to me. Only the people in the locker room and on this roster are the things that are relevant and that matter to me. If they’re still confident and encouraged and still believe in me and believe in us, that’s all that matters to me.”

Green scored eight points in 24 minutes on Friday night. On the season, he averaged 41.6 percent from 3-point range.

“Basketball wise, it was a good look.” Green said. “I had more time than I realized. I should’ve taken more time. I probably rushed it a little bit. I was a little off balance. But we got a good look. We had a second opportunity. Trying to come out and play back again. I’ll do anything to get that shot back, trust me. You’re going to make some. You’re going to miss some. It’s part of the game. I’ve been in that situation plenty of times. I’ve made some. I’ve missed some. Unfortunate it was for us to close out the series, that would’ve been great to win it.