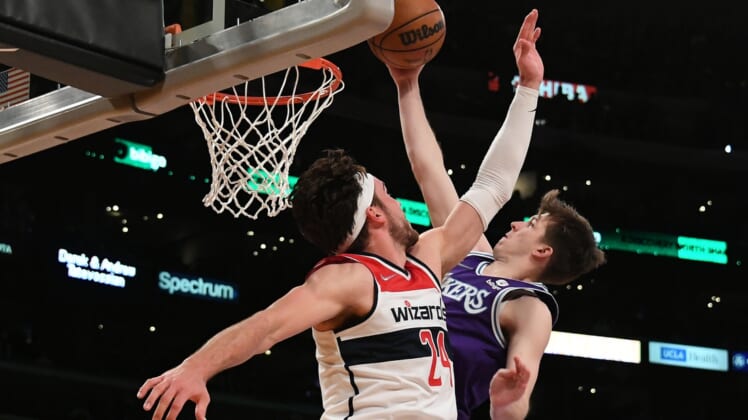 After opening the month with a series of lackluster efforts, the Los Angeles Lakers will carry some much-needed momentum into Saturday night’s matchup against the host Washington Wizards.

LeBron James had 36 points, nine rebounds and seven assists to help the Lakers snap a three-game skid with a 128-123 overtime win over the Toronto Raptors on Friday.

Russell Westbrook made a tying 3-pointer with 0.4 seconds remaining in regulation to force the extra period. The veteran point guard recorded his first triple-double since Dec. 31 with 22 points, 10 rebounds and 10 assists.

Los Angeles ended an 11-game road losing streak while receiving a boost from two unexpected sources. Forward Wenyen Gabriel scored 17 points in his first start of the season, while guard Avery Bradley had 14 off the bench.

“I love how our guys are staying in the fight,” Lakers coach Frank Vogel said. “We have had a tough season, and there’s been plenty of opportunities to quit and let go of the rope and give in. But our guys haven’t done that. We’re staying together. It hasn’t always been perfect, but we came out tonight and got a great team win. Happy to break this road losing streak we’ve been on.”

Los Angeles is looking to sweep the two-game season series against Washington after posting a 122-109 victory on March 11. James scored 50 points in the win while shooting 18 of 25 from the field, with six 3-pointers.

The Wizards fell to 12th place in the chase for a spot in the Eastern Conference play-in tournament with Friday’s 100-97 loss to the New York Knicks. Washington is 5 1/2 games out of the final play-in spot.

Kristaps Porzingis had 18 points and 11 rebounds while Kyle Kuzma scored 18 for the Wizards, who have lost six straight games and nine of their past 11.

Washington guard Kentavious Caldwell-Pope, who missed a potential game-tying 3-pointer at the buzzer, injured his ankle late in the game and is listed as day-to-day.

Washington has allowed at least 113 points in nine of its past 11 games while struggling to contain dominant scorers such as James.

The team’s defensive woes were on display again in a 127-109 loss to the Denver Nuggets on Wednesday. Denver star Nikola Jokic turned in a dominant performance with 29 points and 13 rebounds in 26 minutes.

The Wizards will return home from a quick visit to New York to face the Lakers, who are continuing a four-game trip.

Lakers guard Talen Horton-Tucker (sprained left ankle) missed Friday’s contest while Carmelo Anthony and Wayne Ellington sat out due to a non-COVID illness. All three are listed as day-to-day.

Center Anthony Davis has missed the past 12 games due to a mid-foot sprain but participated in a shooting drill before Friday’s game. He hopes to return before the playoffs.

“Anthony’s had a good week,” Vogel said. “He’s progressing in his intensity level on the court as tolerated, and he’s had a productive week.”

The Lakers are in ninth place in the Western Conference, currently occupying a spot in the play-in tournament.