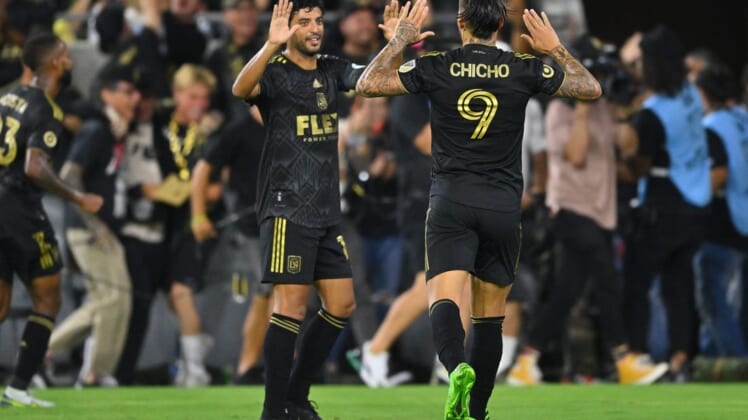 Los Angeles FC aim to stretch their franchise-long winning streak to eight when they visit the woeful San Jose Earthquakes on Saturday night.

Los Angeles FC (18-4-3, 57 points) have outscored their opponents 19-5 during the impressive run. They scored multiple goals in the first six games of the span before recording a 1-0 home win over D.C. United on Tuesday.

The club also holds a nine-point edge over the Philadelphia Union and Austin FC in the battle for the Supporters’ Shield, which goes to the team with the most regular-season points.

One of the keys to LAFC’s success is star forward Cristian Arango, who leads the team with 12 goals. He has 26 tallies in 42 games with the franchise.

“Cristian Arango is a star,” first-year LAFC coach Steve Cherundolo told reporters. “He has understood what we asked of him to change about his game in the beginning of the season and he’s made those adjustments and has continued to score.

“Now, he is not only effective for himself scoring goals but also for the team with his defensive work and setting up other players.”

The Earthquakes aren’t realistically part of the playoff race and have their sights set on next season after hiring U.S. men’s national team assistant Luchi Gonzalez to be the coach in 2023. Interim coach Alex Covelo will continue to coach the Earthquakes for the remainder of the season.

San Jose didn’t look like a team still in the mix when it was walloped 4-1 by FC Dallas last Saturday. But midfielder Jack Skahan insists the white flag won’t be waved.

“For sure this group will keep fighting and will fight until the last game, even if we’re out of the (playoffs),” Skahan told reporters. “That group will fight. They’re a bunch of competitive guys.”

San Jose star forward Jeremy Ebobisse is tied for fourth in the league with 14 goals. He had both goals when the Quakes lost 3-2 at LAFC on May 28. Arango scored on a penalty kick for one of the LAFC tallies.

Los Angeles FC holds an 8-4 series lead but the Earthquakes have won the past three meetings in San Jose.