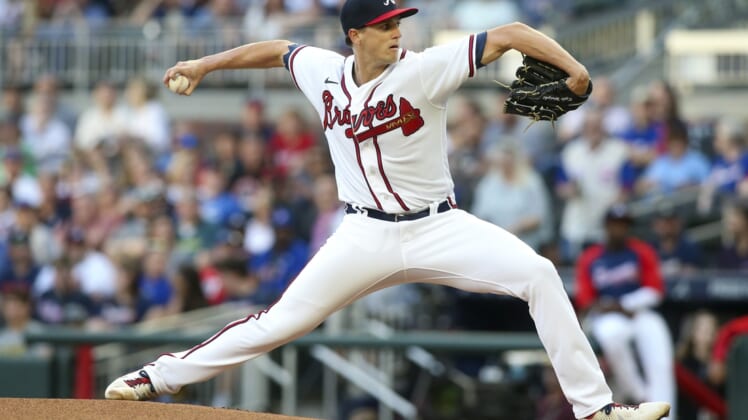 Kyle Wright threw seven strong innings and Dansby Swanson and Adam Duvall both hit their first home runs of the season to help the Atlanta Braves to a 5-1 win over the Chicago Cubs and earn their first series win of the season.

Wright (3-0) allowed one run on three hits, a season-high four walks and eight strikeouts. The Braves are 8-1 in Wright’s last nine starts dating back to Sept. 13, 2020.

A.J. Minter worked the eighth and Will Smith the ninth, each pitching a scoreless inning.

Swanson hit his first home run of the season in the third inning, and Duvall hit a two-run shot in the eighth to complete a three-run rally.

Atlanta’s Ronald Acuna Jr. returned to the lineup 10 months after tearing his right ACL against the Miami Marlins. He grounded out to third base in his first at-bat after receiving a standing ovation. He went 1-for-5, striking out twice, and also stole two bases. He made a nice defensive play in right field to hold Jason Heyward to a single in the fifth inning.

Acuna, 24, learned at 1 a.m. that he would be activated in time to start in right field for the Braves. He had not expected to return for another week, but the team’s front office and medical staff decided to make the move now.

Atlanta scored a run in the first when Austin Riley hit his fifth home run, a long fly that landed midway up the bleachers in left-center field.

The Cubs scored their run in the second inning. With runners on the corners, Wright picked Nico Hoerner off first base. But Hoerner got in a rundown long enough to allow Alfonso Rivas to score.

The Braves took a 2-1 lead in the third inning when Swanson hit a 432-foot shot to left-center.

Atlanta’s burst in the eighth inning put the game away. Travis d’Arnaud doubled home the first run, and Duvall followed a long homer to left-center.