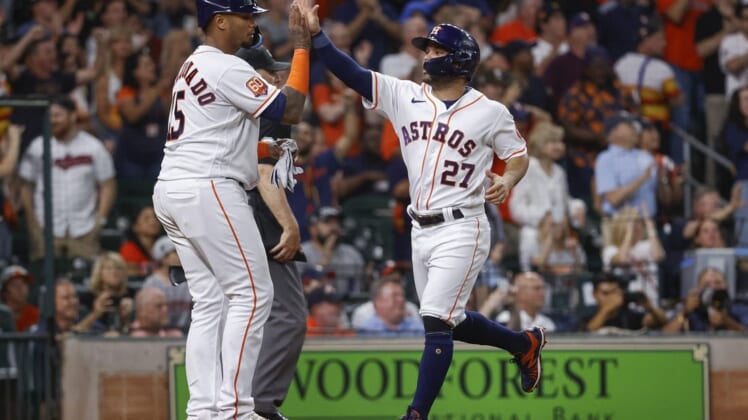 Kyle Tucker clubbed his first homer at home in support of Framber Valdez, who pitched well over seven innings as the Houston Astros defeated the Cleveland Guardians 7-3 on Tuesday.

Tucker, who entered the middle game of this three-game set batting .170 with one extra-base hit and three RBIs in 18 games at Minute Maid Park this season, smacked a three-run homer to right-center field with two outs in the fifth inning off Cleveland right-hander Zach Plesac (1-4) that extended the Astros’ lead to 7-1.

For Tucker, it was his eighth homer overall this season.

Plesac retired the first eight batters he faced before plunking nine-hole hitter Martin Maldonado with a pitch and subsequently loading the bases for Alex Bregman, who laced a first-pitch slider to left that scored Maldonado and Jose Altuve and pushed Houston to a 2-1 lead in the third.

Plesac induced a pair of groundouts to the right side of the infield to open the fourth before Jeremy Pena singled and advanced to second on an errant pickoff attempt by Plesac. Pena scored when Chas McCormick followed with a two-out double that extended the lead to 3-1.

Yordan Alvarez drove home Altuve with a single to left in the fifth inning, two batters before Tucker plated Michael Brantley and Alvarez with his 410-foot drive into the home bullpen.

Plesac allowed seven runs on nine hits and one walk with five strikeouts over 4 2/3 innings.

Valdez (4-2) lost an epic confrontation with Guardians third baseman Jose Ramirez in the top of the first but ultimately recovered to post his sixth consecutive quality start. Ramirez fouled off nine pitches during a 12-pitch at-bat that concluded with his drilling a fastball out to left for his 11th home run.

Ramirez added a double in the fourth and a run-scoring groundout in the sixth, but Valdez was largely undaunted en route to a season-high 106 pitches.

Valdez did not walk a batter while surrendering seven hits and recording four strikeouts.