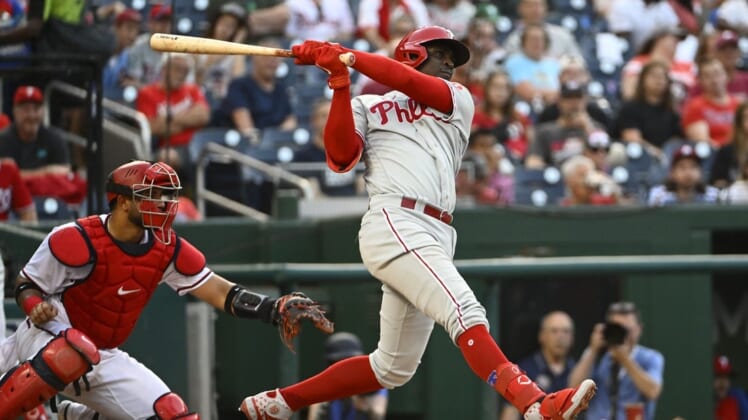 Kyle Schwarber smacked two homers and had three RBIs and Zach Wheeler pitched seven strong innings to help the Philadelphia Phillies rout the host Washington Nationals 10-1 on Thursday night in the opener of a five-game series.

Yairo Munoz also homered while Nick Castellanos and Didi Gregorius each had two RBIs as the Phillies won for the 12th time in their past 14 games.

Wheeler (6-3) gave up one run and four hits while winning his sixth straight decision (across nine starts). The right-hander struck out three and walked none.

Josh Bell homered for the Nationals, who have been outscored 41-13 during a five-game losing streak. Overall, Washington has dropped eight of its last 10 games.

Bell had two of the Nationals’ five hits. Juan Soto (right knee) returned from a two-game absence and went 0-for-4.

Washington left-hander Patrick Corbin (3-9) allowed nine runs, but the seven against him in the third inning were all unearned. Corbin gave up eight hits and one walk and struck out two.

Corbin retired the first eight batters until Munoz reached on an error by second baseman Carlos Hernandez with two outs in the third inning.

Schwarber followed with a 424-foot homer to center and the floodgates were open. Rhys Hoskins doubled, Bryce Harper walked and Castellanos followed with a run-scoring single to make it 3-0.

J.T. Realmuto reached on an infield single to drive in another run, and Gregorius ripped a two-run double to right. Alec Bohm followed with a bouncer to the right side of the infield, and Bell’s throw to Corbin covering first was wild – Gregorius scored to make it 7-0.

Schwarber took Corbin deep again in the fourth with a 415-foot blast to right. It was Schwarber’s 18th homer, and it marked the third time this season he had hit two in a game.

Castellanos added an RBI double later in the inning to make it 9-0.

Bell hit a 417-foot homer to center in the bottom of the fourth. It was his eighth of the campaign.

Munoz’s homer to left in the eighth made it 10-1. The 375-foot blast was his first home run of the season.

Nationals infielder Ehire Adrianza pitched a scoreless ninth, giving up one walk and striking out Bohm.