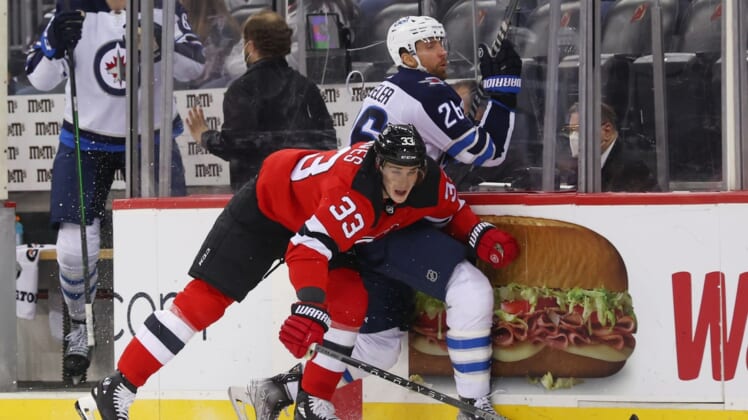 Kyle Connor scored the go-ahead goal on a breakaway late in the second period to lift the visiting Winnipeg Jets to a 2-1 victory over the New Jersey Devils on Thursday night in Newark, N.J.

Eric Comrie gave workhorse goaltender Connor Hellebuyck a breather and made 33 saves to win his fourth straight start. Comrie was victorious in his lone appearance while playing with the Devils last season.

Defenseman Brenden Dillon also scored a goal Thursday as the Jets won their second consecutive contest and fourth in their past six games (4-1-1).

Nico Daws turned aside 28 shots for the Devils, who saw their modest two-game winning streak end.

New Jersey’s Jesper Bratt lost control of the puck in the offensive zone, and Connor used his speed to keep trailing defenseman Ryan Graves in his rear-view mirror. Connor then backhanded the puck under the crossbar to give the Jets a 2-1 lead with 54 seconds remaining in the second period.

Connor’s goal was his team-leading 35th of the season and sixth in his past seven games.

Comrie made the slim advantage hold up by denying Pavel Zacha on a 3-on-1 rush early in the third period.

Mark Scheifele led a 2-on-1 rush before lifting a saucer pass to Dillon, who scored his second goal of the season to give Winnipeg a 1-0 lead at 3:22 of the first period.

Hughes buried a one-timer following a cross-ice feed from Bratt to forge a tie at 1-1 with 1:33 remaining in the period. Hughes’ 18th goal of the season extended his point streak to three games (one goal, four assists).

Before the game, the Devils honored Travis Zajac for playing in 1,000 NHL games. The Winnipeg native actually accomplished the feat against the Washington Capitals on Feb. 21, 2021.