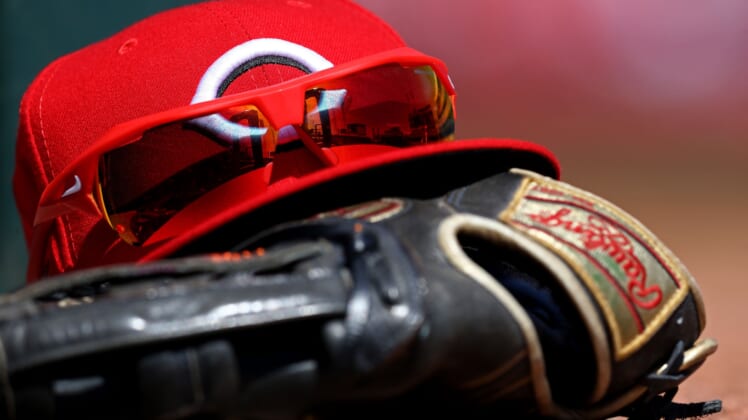 Apr 3, 2019; Cincinnati, OH, USA; A view of the stadium reflection in the Nike sunglasses on a Reds hat in the dugout in the game against the Milwaukee Brewers at Great American Ball Park. Mandatory Credit: Aaron Doster-USA TODAY Sports

Krall, 42, takes over the duties previously performed by Dick Williams, who resigned on Oct. 7.

“We are excited for Nick to assume the lead over our baseball operations,” Reds CEO Bob Castellini said in a news release. “His hands-on approach as General Manager gives us the opportunity to reinstate that role as the top position in our baseball department and keep the years of hard work that happened under his purview producing stronger, more competitive teams.”

Krall is involved in all aspects of the Reds’ day-to-day operations, including administration, arbitration, contract negotiations, rules and waivers compliance and player acquisitions while also overseeing the scouting, analytics and player development departments.

Cincinnati finished 31-29 in 2020 and lost to the Atlanta Braves in the National League wild-card series, the Reds’ first postseason appearance since 2013.