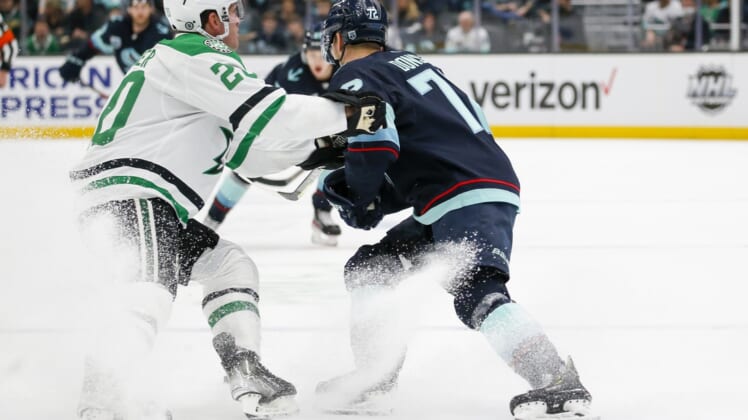 Chris Driedger made 29 saves as the host Seattle Kraken knocked the Dallas Stars out of playoff positioning in the Western Conference race with a 4-1 victory Sunday night.

John Klingberg scored and Jake Oettinger stooped 25 of the 28 shots he faced for the Stars (39-26-3, 81 points), who slipped a point behind Vegas for the conference’s second and final wild-card berth. The Golden Knights won 3-2 in overtime at Vancouver.

The Kraken opened the scoring on McCann’s short-handed goal 3:55 into the game. Wennberg carried the puck over the blue line and both defenders gravitated toward him, leaving McCann alone on the left wing as the Stars were in the midst of a line change. McCann took a pass from Wennberg and beat Oettinger with a wrist shot from just outside the faceoff dot. It was McCann’s team-leading 25th goal of the season.

Donato made it 2-0 on a breakaway at 4:53 of the third. Soucy’s long lead pass sent Donato in alone down the right wing. He deked Oettinger to get around the goaltender before tapping the puck into an open net.

The Stars finally got on the board on Klingberg’s wrist shot from between the top of the faceoff circles at 14:25 of the third. The shot went just over Driedger’s glove, deflected off the bottom of the crossbar and fell just over the goal line.

Gourde scored on a breakaway at 17:47 of the third and Kuhlman banked in an empty-netter at 19:19.

The Stars were attempting to sweep their four-game West Coast trip after two wins in Anaheim and another in San Jose.