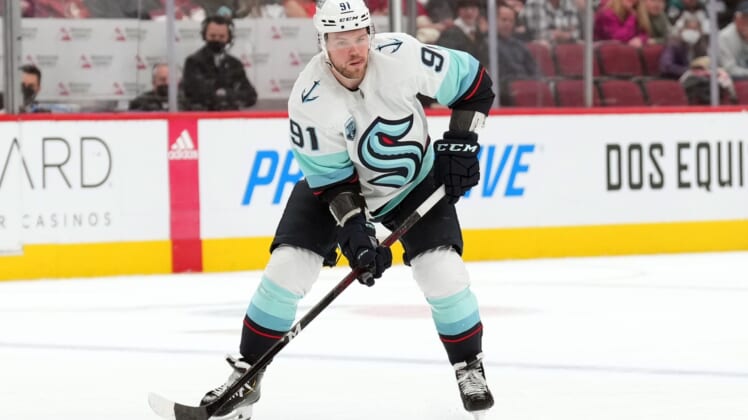 The Seattle Kraken will try for their first three-game winning streak when they face the Kings on Saturday night in Los Angeles.

Perhaps it shows the resiliency of the expansion franchise that Seattle is coming together just days after the league’s trade deadline.

With six players sent packing in the days before the deadline, including captain Mark Giordano, the Kraken needed somebody to step up. And several did, with Carson Soucy taking the largest leap.

The defenseman scored twice Tuesday as the Kraken defeated the host Arizona Coyotes 4-2.

“I was just trying to make the most of the opportunity with ‘Gio’ gone and everything,” said Soucy, who quarterbacked the second power-play unit and put eight shots on goal, doubling his previous career-high. “It’s tough to lose friends but it’s still a business, and you’ve got to make the most of it.”

Sprong scored a power-play goal in the second period to tie the score at 2-2.

Sprong snapped a 10-game goalless drought that dated to Feb. 1.

“I was a little snakebit in Washington, but I can shoot the puck,” said Sprong, a former second-round draft pick who turned 25 last week. “I got an opportunity and I made the most of it.”

Kraken coach Dave Hakstol seemed pleased with the effort from his reconfigured lineup, particularly after they fell behind twice, and then when they got the lead.

Saturday’s game is the first of a pair in Los Angeles, as the Kraken face the Kings again on Monday night.

“It looked disjointed between forwards and defensemen, whether it was passing execution coming out of our end,” said Kings coach Todd McLellan, who was without seven players. “Defending in our zone, there wasn’t a lot of communication. Duplication between forwards and defensemen, missed coverages from back of the net, so we have to clean that up if we want to have success moving forward.”

Phillip Danault scored twice for the Kings, including the tying goal midway through the third period, and Trevor Moore scored shorthanded for the second consecutive game. Moore is tied for the league lead with four shorthanded goals this season.

With the loss, second-place Los Angeles and its 79 points slipped to just a two-point lead over Edmonton in the Pacific Division, with the Oilers having a game in hand. Moreover, Vegas trails Edmonton by three points and is third in the wild-card race behind Nashville, with 78 points, and Dallas, with 75 points.

“We had a strong start. And we got down a little bit, and then we pick it up and we came back in the third, and that was a huge point,” Danault said. “Obviously, we didn’t get the finish we wanted.”

Danault has 21 goals this season, far exceeding his previous best of 13 in his first seven seasons between Chicago and Montreal.

Both of his goals Thursday came right in front of the net.

“He has a knack for stick on puck, and he may be one of the best players I’ve seen at positioning his body so that he can keep plays alive,” McLellan said. “He’s got something that we’d like to teach all the players, so we may have to pick his brain all summer.”

Danault also scored twice in the Kings’ lone previous meeting with the Kraken, a 3-1 L.A. win on Jan. 15 in Seattle.