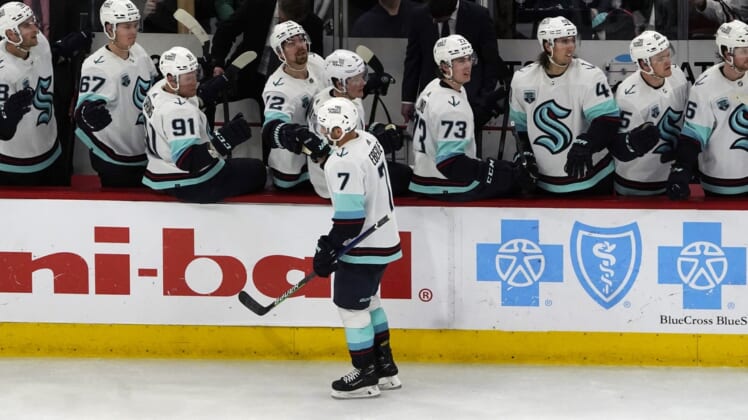 The No. 2 overall pick in last summer’s NHL draft has completed his collegiate season, with Michigan losing to Denver in overtime of the semifinals of the NCAA’s Frozen Four on Thursday night in Boston.

That means Beniers potentially could sign any day with the expansion Seattle Kraken, the team that drafted him, and be in their lineup as early as Saturday’s home game against the Calgary Flames at Climate Pledge Arena.

Michigan teammates Owen Power, who went No. 1 overall to Buffalo in the 2021 draft, and Kent Johnson, the No. 5 pick by Columbus, both signed three-year, entry-level contracts with their NHL clubs Friday.

Turning pro now would allow Beniers to use up a year of his entry-level deal and allow him to reach restricted free agency more quickly.

“The agent of the player wants you to, in essence, ‘burn’ the year,” Kraken general manager Ron Francis said last month. “So, in theory, if at the end of this season with Michigan if he wanted to come out, that’s the deal you’re most likely to do for getting him into our lineup.”

Beniers, a center, led the Big Ten in scoring in the regular season and finished with 43 points (20 goals, 23 assists) in 37 games.

Beniers’ debut certainly would create some buzz in Seattle.

The Kraken (23-42-6, 52 points) haven’t come close to matching the exploits of the most recent expansion team — the Vegas Golden Knights reached the Stanley Cup Final in their inaugural season — but have played .500 hockey over their past 10 games (5-5-0).

Seattle is coming off a 2-0 victory Thursday at Chicago in which Philipp Grubauer made 29 saves for his second shutout of the season. Alex Wennberg and Jordan Eberle scored the goals.

The Kraken’s penalty killers thwarted Chicago for 1:56 of a 5-on-3 situation late in the second period as part of a double-minor for high sticking against Carson Soucy.

“Grubi was good, our penalty kill was good … that’s the difference in the hockey game,” Kraken coach Dave Hakstol said. “Grubi didn’t need to make a ton of saves on the penalty, but he made some real good saves 5-on-5 … He looked real confident.”

While the Kraken are in last place in the Pacific Division, the Flames (43-19-9, 95 points) are in first. They entered the weekend with a six-point lead over second-place Edmonton with a game in hand.

The Flames have won the first three games of their four-game trip that concludes Saturday. They defeated Los Angeles 3-2 on Monday, Anaheim 4-2 on Wednesday and San Jose 4-2 on Thursday.

Matthew Tkachuk had a goal and two assists against the Sharks and Dan Vladar made 31 saves in his first start since March 19.

But he was more interested in talking about the play of Vladar.

“What a game from him,” Tkachuk said. “I thought he was awesome… He was probably the main reason we won.”

Elias Lindholm scored twice for the Flames and Johnny Gaudreau had two assists.

“I’m super excited about where our team is at this year,” Gaudreau said. “A lot of players are playing really well this season. It’s been a lot of fun to be a part of this group and I’m looking forward to the rest of the year.”