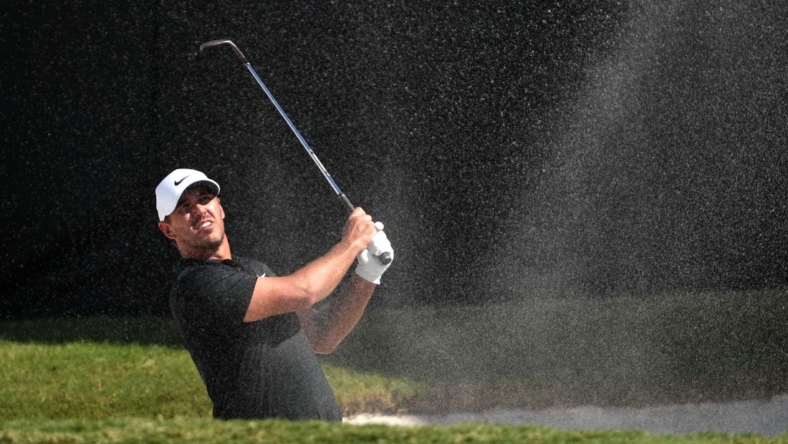 Brooks Koepka and Chase Koepka led Smash to a sweep in Saturday’s semifinals and into the finals of the LIV Golf Team Championship at Trump National Doral in Miami.

They join 4 Aces, Stinger and Punch in Sunday’s finale.

Brooks Koepka defeated Ian Poulter 3 and 1 and Peter Uihlein bested Lee Westwood 4 and 2 to lead Smash over the Majesticks. Jason Kokrak and Chase Koepka put the finishing touches on the sweep by defeating Henrik Stenson and Sam Horsfield 1 up in the foursomes match.

Johnson won his match over Shergo Al Kurdi of Cleeks but 4 Aces needed a win by Pat Perez and Talor Gooch in foursomes to secure their victory.

“We want to win the first championship of LIV Golf, and yeah, I mean, it’s all about — tomorrow, it’s anybody’s ballgame,” Johnson said. “I don’t think there’s — every team up here obviously is playing well. There’s no favorites in my eyes tomorrow. You know, it’s what four guys can play the best on the teams obviously because all four scores count. So everybody on your team has to play well.”

Stinger also needed the win in foursomes over Crushers to advance. Oosthuizen defeated Bryson DeChambeau 1 up to get things going for Stinger.

Punch fell behind when captain Cameron Smith fell to Sergio Garcia 2 and 1 in their match. But Marc Leishman defeated Carlos Ortiz and Matt Jones and Wade Ormsby bested Abraham Ancer and Eugenio Chacarra 1 up in foursomes to clinch.

“I think everyone is out to beat the 4 Aces tomorrow,” Smith said. “They have been the one on top all year. So it will be nice to maybe get out there and show them someone else can win, personally.”

Sunday’s final round will utilize standard stroke play. All four players on each team will compete and everyone’s scores will count toward the team score, with the lowest team score winning the team championship and $16 million from the $50 million prize pool.