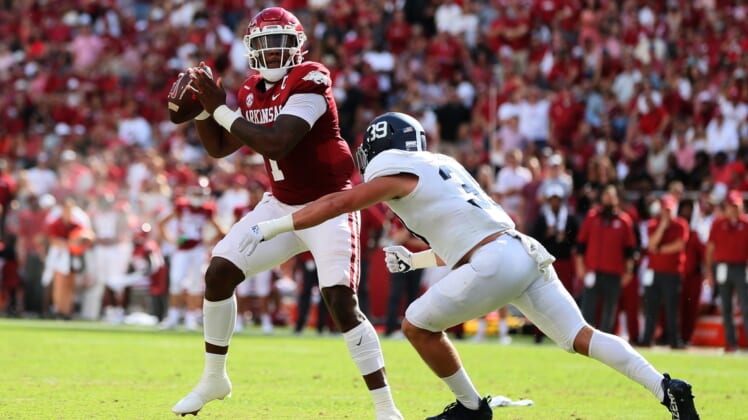 KJ Jefferson threw for 366 yards and three touchdowns to lead the No. 20 Arkansas Razorbacks to a 45-10 victory over visiting Georgia Southern in a nonconference game Saturday in Fayetteville, Ark.

Dominique Johnson rushed for a team-high 72 yards and touchdown on five carries as Arkansas (3-0) ran for 269 yards on 48 carries — an average of 5.6 yards per attempt — and rolled up 633 yards of total offense.

Jefferson, who went 13-for-23 passing, highlighted his day by throwing a 91-yard touchdown pass to Treylon Burks in the third quarter. It ranked only behind Matt Jones’ 92-yard scoring strike to Richard Smith against Tennessee in 2002 in the school’s record book.

Arkansas took control on its first possession en route to its first 3-0 start in five years.

After a 47-yard pass from Jefferson to Tyson Morris pushed the pass to the Eagles’ 21 yard-line, Smith capped the drive three plays later by scoring on a 13-yard run for a 7-0 lead less than three minutes into the game.

Arkansas doubled its lead on its next possession, when Dominique Johnson capped a 15-play, 94-yard drive with an 11-yard touchdown run with 3:31 left in the opening quarter.

After Morris caught 14-yard touchdown pass from Jefferson for a 21-0 lead with 8:42 left in second quarter, the Eagles (1-2) finally broke through on their next possession behind redshirt junior quarterback Justin Tomlin.

Tomlin kept the ball on a 3rd down play and cut to his right before outrunning the entire defense for a 76-yard touchdown with 7:22 left in the first half.

Arkansas needed just four plays to find the end zone to open the second half, as Jefferson connected with De’Vion Warren streaking down the sideline for a 60-yard touchdown and a 31-10 lead.

Malik Hornsby pushed the lead to 45-10 with a six-yard touchdown run with 8:22 left in the game.