Kirk Cousins had the time of his life following win in D.C. over former team

Kirk Cousins celebrated like a champ following his winning return to Washington. 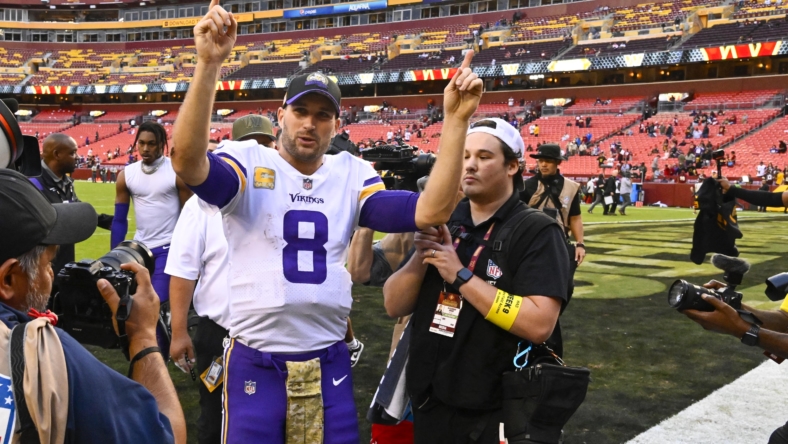 Kirk Cousins and the Minnesota Vikings came out victorious on Sunday in his return to Washington, D.C., beating the Commanders by a score of 20-17 thanks to a field goal from kicker Greg Joseph with just seconds remaining.

The win marked the very first time Cousins had faced his former team, where he had spent his first six NFL seasons. That same team is also where he famously led Washington from a 24-0 deficit to a dramatic 31-30 win over the Tampa Bay Buccaneers back in 2015 that was followed by a very emphatic and instantly viral, “you like that!”

The fire felt fitting, as it was and remains the biggest comeback in franchise history.

So on Sunday, seven years after that impossible-to-forget moment, the scene was set following Minnesota’s win over the Commanders. Cousins delivered exactly what the masses, or at least what his teammates, wanted. A postgame locker room victory cry of “you like that!”

As Cousins stated to reporters, “it was the first thing that came to mind.”

To be fair to Cousins and the now 7-1 Vikings, it was the first thing that came to most of our minds.

What most certainly did not come to mind was a shirtless, dancing Kirk Cousins wearing a mound of chains that were bizarrely paired with Clark Kent frames on the plane ride home while his encouraging teammates loved every second of it.

Rightfully so, really, because the Minnesota Vikings are winners of six straight and currently the No. 2 seed in the NFC.

If you think that was where it ended, it appears it was only just the beginning.

Kirk Cousins and the boys circled right back to the forever-engrained “you like that!” chant and who knows what else thereafter.

In what has been a pretty strange first half of the NFL season, where some of the elderly quarterbacking legends like Aaron Rodgers appear to be fading at an alarming pace, this is our new reality.

Kirk Cousins and the Minnesota Vikings, kings for the moment.