Vikings rally past Commanders in fourth quarter, improve to 7-1 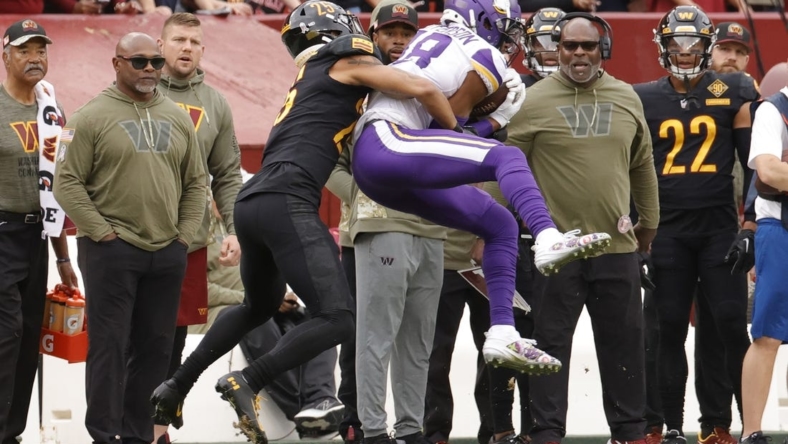 Greg Joseph converted a 28-yard field goal with 12 seconds left as the Minnesota Vikings rallied from a 17-7 fourth-quarter deficit to top the Washington Commanders 20-17 on Sunday in Landover, Md.

Joseph’s game-winning kick came four plays after he made a 22-yarder with 1:52 remaining to break the tie. But Washington was flagged for unnecessary roughness for contact with the long snapper. That enabled Minnesota (7-1) to burn most of the remaining time and tee up the deciding kick.

Kirk Cousins completed 22 of 40 passes for 265 yards with two touchdowns and an interception in his first game in Washington since leaving the franchise five years ago. His 12-yard scoring strike to Dalvin Cook with 7:46 on the clock evened the score at 17.

Taylor Heinicke hit 15 of 28 passes for 149 yards with two scores and a pick for the Commanders (4-5), which saw their three-game winning streak end. He put them ahead 17-7 on a 6-yard touchdown pass to Dax Milne just 46 seconds into the fourth quarter.

Justin Jefferson caught seven passes for 115 yards and a score for the Vikings, which outgained Washington 301-263.

Minnesota wasted little time initiating the scoring. On the game’s first possession, it ripped off a 78-yard drive that Cousins capped with a 9-yard touchdown pass to Jefferson at the 9:17 mark. That was it for its offense until the fourth quarter.

The Vikings’ defense kept Washington out of the end zone in the first half, however, surrendering only a 44-yard field goal by Joey Slye with 37 seconds left before intermission. Minnesota could have gone up two scores, but Cousins tossed an interception to Danny Johnson with six seconds remaining.

The Commanders grabbed a 10-7 edge just 50 seconds into the third quarter when Heinicke hit Curtis Samuel for a spectacular 49-yard scoring strike. Samuel outleaped multiple defenders to make the catch inside the 5, then rolled into the end zone after a Viking failed to touch him down.