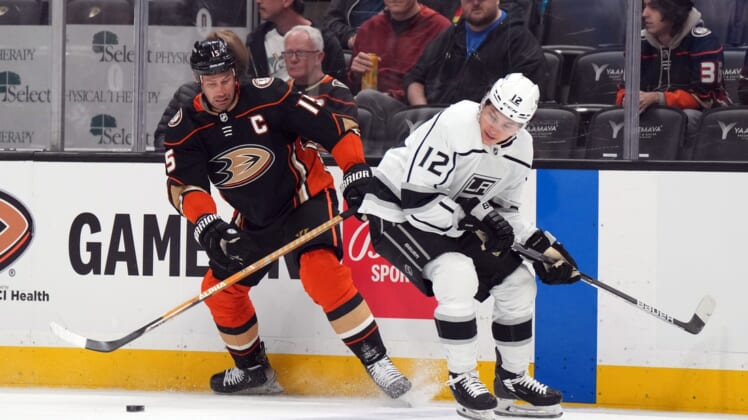 Phillip Danualt scored a goal for the fourth consecutive game and goaltender Jonathan Quick sparkled in net as the visiting Los Angeles Kings strengthened their hold on third place in the Pacific Division and a playoff spot with a 2-1 victory over the Anaheim Ducks on Tuesday.

Adrian Kempe also scored for the Kings (41-27-10, 92 points), who have won two straight games. Quick made 29 saves — 16 of them in the second period, including a couple of jaw-droppers during an Anaheim power play while the score was tied.

Los Angeles is two points behind the Edmonton Oilers for second place in the Pacific Division.

Adam Henrique replied for the Ducks (30-34-14, 74 points), who have long been eliminated from playoff contention. Goalie John Gibson stopped 26 shots.

With the score tied after two periods, Danault put the Kings ahead. thanks to a controversial call 32 seconds into the final frame. After Viktor Arvidsson’s shot was stopped, he collided with the Ducks goalie, and Danault converted the rebound chance for his 25th goal of the season. Officials originally waved off the goal, but the Kings challenged the call and it was ruled good after the review.

Prior to this season, Danault’s previous career high for goals in a season was 13.

Los Angeles did a masterful job of limiting chances in the third period en route to the victory.

After a scoreless opening frame, Kempe scored his team-best 34th goal 27 seconds into the second period. Anze Kopitar won an offensive-zone face-off and Kempe found the mark from the slot.

Henrique continued his strong late-season play by tying the score five minutes later. While on the power play, Henrique was sprung for an open chance and converted a backhand deke for his 18th goal of the season.