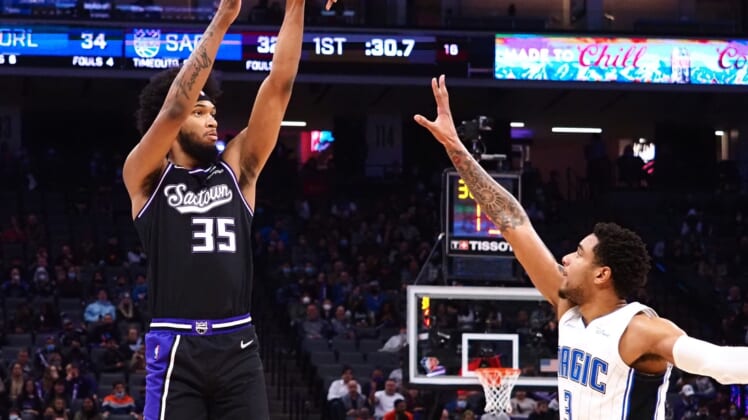 De’Aaron Fox scored 33 points on 12-of-18 shooting to help the host Sacramento Kings notch a 142-130 victory over the struggling Orlando Magic on Wednesday night.

Tyrese Haliburton scored 18 points, matched his season high of five 3-pointers and also tied his career best of 11 assists for the Kings, who have won three straight games for the first time this season.

Cole Anthony matched his career best of six 3-pointers and tied his season high with 33 points for Orlando, which has dropped three consecutive contests and 10 of its past 11.

Tristan Thompson recorded 14 points and 10 rebounds and Marvin Bagley III had 12 points for Sacramento, which connected on 54.6 percent of its field-goal attempts, including 15 of 34 (44.1 percent) from behind the arc.

Kings big man Richaun Holmes exited with 5:52 left in the first half and was later ruled out with a facial laceration near his right eye. Holmes was inadvertently hit in the face by Bamba.

Sacramento used a 24-6 surge in the third quarter to open up a 94-78 advantage. Mitchell ended the flurry with a 3-pointer with 5:10 left in the stanza.

The Magic later pulled within eight points on Ross’ three-point play with 2:56 remaining in the third, but Bagley’s dunk with 20.7 seconds to go allowed Sacramento to take a 104-92 lead into the final quarter.

Haliburton scored five points in a 27-second span of the fourth quarter to push the Kings’ lead to 110-96. A short time later, he buried a straightaway 3-pointer to give Sacramento a 119-103 lead with 7:47 remaining.

Barnes made two free throws to push the lead to a game-best 18 at 125-107 with 6:25 left. The Magic pulled within 137-130 on Wagner’s three-point play with 1:05 to play before Thompson’s three-point play and Mitchell’s short baseline jumper put the game away for the Kings.

Defense was in short supply in the first half as the Kings held a 70-67 lead at the break.