Why Kevin Love to the Warriors Makes the Most Sense

Everyone wants to talk about the potential of the Minnesota Timberwolves sending Kevin Love to the Cleveland Cavaliers for a package that includes 2014 No. 1 overall pick Andrew Wiggins.

And it makes sense. That’s a sexy trade.

Cleveland would team Love up with LeBron James and Kyrie Irving to form the best Big Three in the Eastern Conference. Heck, maybe even the entire NBA. The Cavaliers would easily become the odd-on favorites to win the NBA championship. And James would be appeased by a team that he chose over potentially more attractive destinations.

For the Timberwolves, they would acquire an elite young swing player to team up with Zach LaVine and Ricky Rubio. In addition to that, Anthony Bennett would provide this team another young player to build around.

The issues with this potential deal haven’t really been discussed yet. First off, Bennett has been a bust since joining the NBA as the No. 1 overall pick in the 2013 draft. He averaged just over four points in less than 13 minutes of action per game as a rookie. Coming into the league overweight, Bennett simply couldn’t handle the day-to-day grind that came with being a NBA player.

Reports do indicate that Bennett has lost a nice amount of weight and seems to be in top-notch physical condition. He is still an unknown and has yet to prove he can be a good professional basketball player.

While Wiggins has impressed everyone during Summer League and was considered by most to be the consensus No. 1 prospect in a loaded 2014 NBA draft, he’s not a proven player at this point. The Kansas swingman boasts loads of untapped potential and could end up being a consistent All-Star performer. Then again, there is a small chance that he flames out at the highest level. However unlikely this might be, it is something the Timberwolves should take into account when discussing a potential deal internally.

Now let’s focus on why a Love to the Golden State Warriors makes sense for both Steve Kerr’s team and Minnesota. 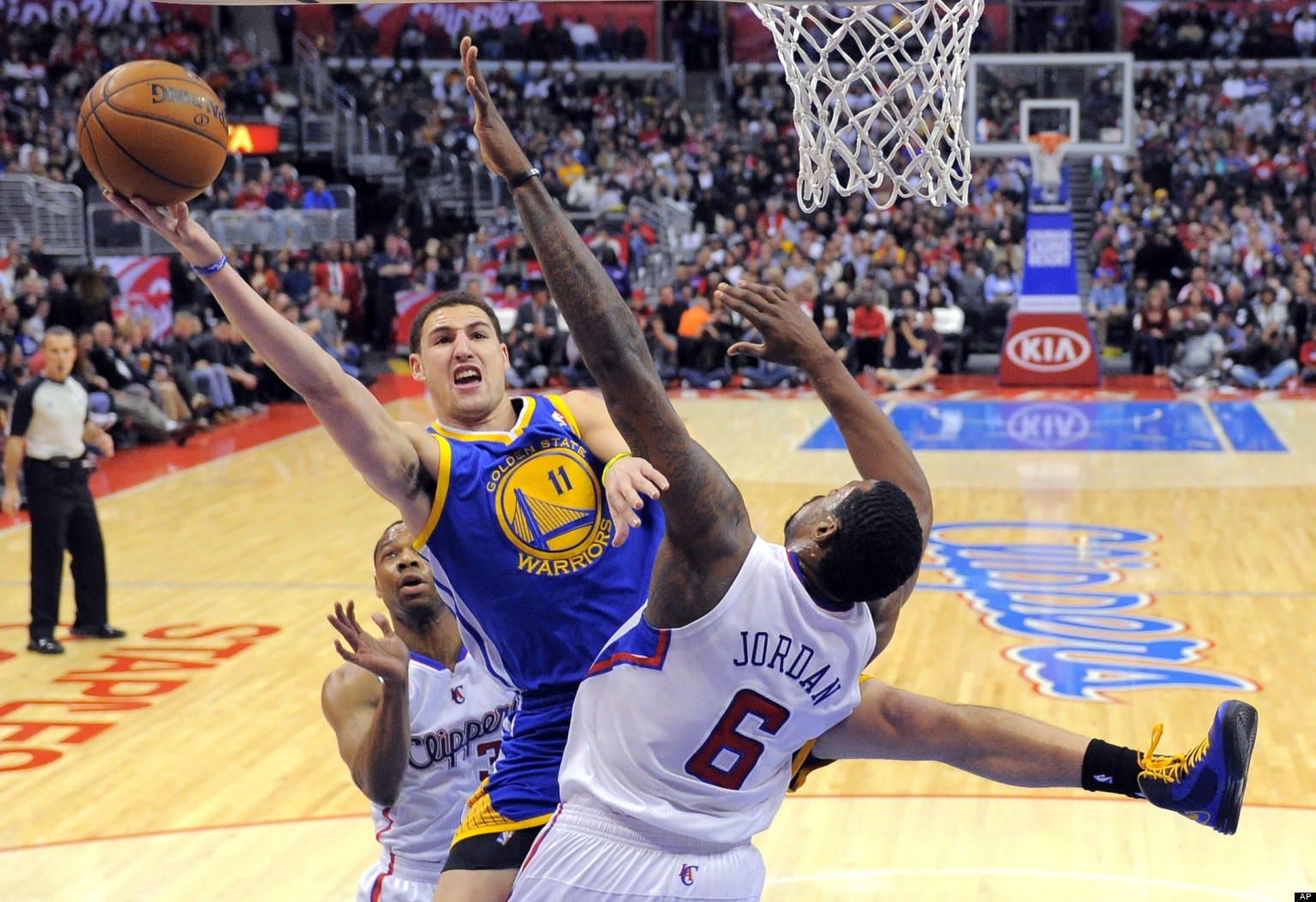 Courtesy of Chat Sports: Thompson upped his overall game last year and is now seen as a future All-Star.

1. Klay Thompson: This former lottery pick put up outstanding numbers during the 2013-2014 campaign. He averaged 18.4 points and 3.1 rebounds per game, while shooting 42 percent from three-point range. In addition to what Thompson did offensively, he was among the best defensive two guards in the NBA. Imagine teaming him up with Ricky Rubio. That would form one of the better young backcourts in the Western Conference. While Thompson doesn’t possess the same upside as Wiggins, his floor is considerably higher. In reality, he’s a safer bet.

2. David Lee: Remember, Lee is just one year removed from putting up an All-Star performance for Golden State. He averaged 18.2 points and over nine rebounds per outing this past season. If you want to talk about Kevin Love comparisons, Lee is a poor man’s version of the Timberwolves All-Star. He’s also an attractive long-term contract to bring on. He might be set to earn $30 million over the next two seasons, but Lee’s contract becomes a valuable trade commodity following the 2014-2015 campaign.

3. Harrison Barnes: Barnes took a major step back last season, mainly due to being relegated to bench duty after Golden State acquired Andre Iguodala. The former No. 7 overall pick out of North Carolina was still able to put up nearly 10 points and over four rebounds per outing as the Warriors top option off the bench. He has a tremendous amount of upside as a swing player and could potentially be a more attractive option than Anthony Bennett.

Why it Makes Sense for the Warriors and Love 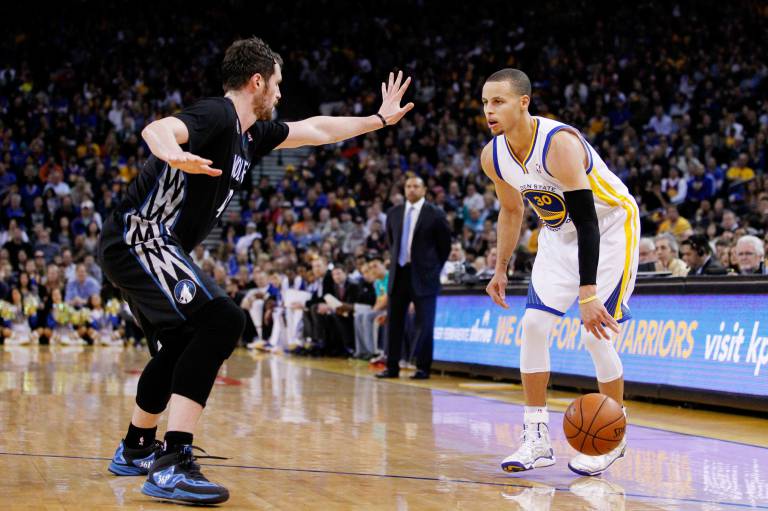 Giving up these three players plus a first-round pick for Love seems to be an incredibly high price to pay. But it’s a deal that teams looking to contend for a NBA championship make. As currently formed, the Warriors are not a championship-caliber team. If they were able to add Love to the mix with Stephen Curry, Andrew Bogut and Iguodala, they would make that leap from pretender to contender.

Just imagine Love playing that stretch four position. His ability to stretch the court on the offensive side of the ball would leave Curry with many open looks from the outside. As if Curry needs that in the first place. He has led the league in both three pointers made and three-point attempts in each of the last two seasons. Adding Love to the mix would create one of the best inside-out games in the NBA, if not the best. 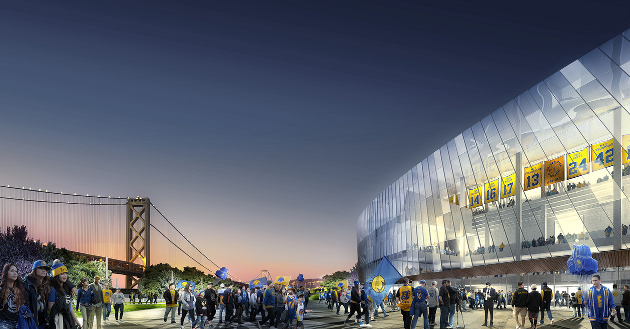 The potential of a new arena in San Francisco is attractive to potential free agents.

Then you have the reports that Love would pick up his option for 2015-2016 if he were traded to the Warriors. This means that Golden State wouldn’t be gambling on Love leaving following just one season. Love, who has stated he’s willing to play with the Cavaliers, has also indicated in the past that he would like to play in California. Along with the Clippers, Golden State is the most attractive destination in the state. A young star in Curry coupled with a move to San Francisco in the not-so-distant future makes the Warriors a real long-term possibility for Love.

It all comes down to who Flip Saunders prefers, Andrew Wiggins or Klay Thompson. He seems to like both options at this point. But don’t count the Warriors out of this sweepstakes simply because Wiggins has name recognition and LeBron James wants to join forces with Love.

That would be too simplistic, especially with the way the NBA offseason has turned out thus far.