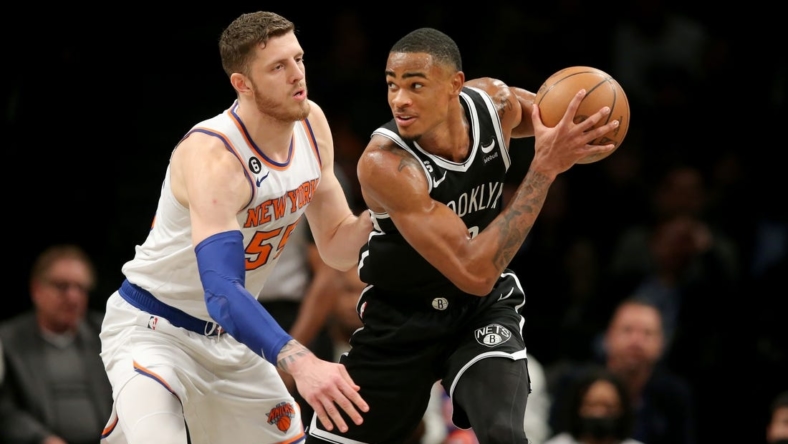 Kevin Durant totaled 29 points along with season highs of 12 assists and 12 rebounds as the host Brooklyn Nets never trailed and cruised to a 112-85 rout of the New York Knicks on Wednesday night.

The Nets led by as many as 35 as Brooklyn improved to 3-2 under Jacque Vaughn, who had the interim tag removed from his title on Wednesday afternoon, and beat the Knicks for the eighth straight time.

Durant shot 10-for-19 from the floor in recording his 17th career triple-double and fifth since becoming a Net.

Seth Curry added a season-best 23 points as the Nets shot 48.3 percent, hit 14 3-pointers and also beat the Knicks for the 13th time in the past 16 meetings.

Edmond Sumner contributed a season-best 18 points while starting for the suspended Kyrie Irving. Nic Claxton chipped in 12 points as the Nets grabbed a season-best 55 rebounds.

Julius Randle totaled 24 points with 11 rebounds and hit four 3-pointers after knocking down eight on Monday against Minnesota. But the Knicks still lost for the fifth time in seven games.

RJ Barrett added 16 points and Jalen Brunson finished with 14, but the Knicks shot a season-low 32.2 percent, missing 31 of 43 3-point tries after hitting a season-high 19 Monday.

Durant scored 11 points as the Nets shot 60 percent and held a 38-22 lead after a dominant opening quarter. Curry scored 12 straight points early in the second to give Brooklyn its first 20-point lead and the Nets outscored the Knicks 19-7 over the final seven-plus minutes for a 69-44 lead by halftime.

Brunson’s three free throws brought the Knicks within 86-71 at the 3:03 mark of the third quarter, but Brooklyn held a 92-71 lead into the fourth.

The Nets put the game out of reach with Durant getting a break as Ben Simmons hit a layup with 9:38 remaining. Durant reached his triple-double with a rebound of a missed 3-pointer by Immanuel Quickley, then consecutive 3-pointers by Curry upped the lead to 103-73 with 6:08 remaining.