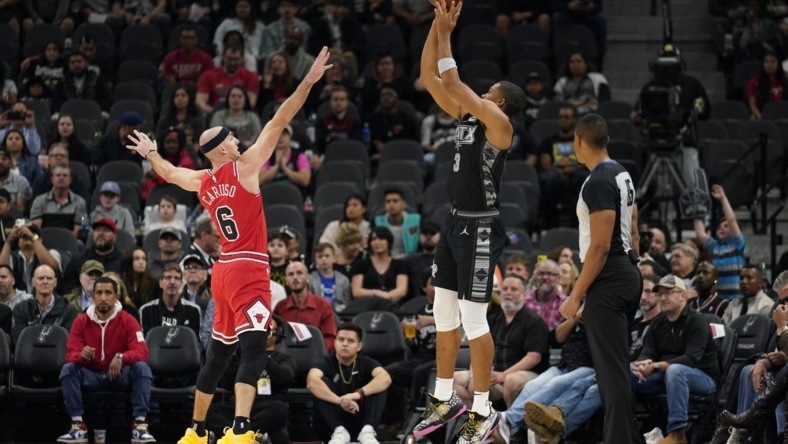 Keldon Johnson scored a season-high 33 points and sank 3 of 4 free throws in the final seconds as the San Antonio Spurs outlasted the visiting Chicago Bulls 129-124 on Friday.

Chicago’s DeMar DeRozan also scored 33 points became the 50th player in NBA history to reach 20,000 points in his career. He is one of seven active players in that club.

The score was tied 94-94 after three quarters, and Chicago led for most first seven minutes in the fourth.

The Spurs went ahead 115-114 on Johnson’s two free throws with 4:31 to play. San Antonio held on thanks to a closing 3 1/2-minute stretch in which Tre Jones scored seven points and Jakob Poeltl added four while the Bulls committed three turnovers.

Coby White put up 19 points for the Bulls, who had a two-game winning streak snapped. Andre Drummond scored 17 points and grabbed 14 rebounds, Ayo Dosunmu hit for 12 points and Patrick Williams racked up 10 for Chicago.

Chicago surged to the lead early in the second quarter and was up by as many as nine points before the Spurs reeled off 10 straight points capped by a 3-pointer by Sochan. San Antonio took a 62-60 edge to the break.

DeRozan led the Bulls with 14 points in the half while White added 13. Poeltl paced San Antonio with 14 points, with Johnson scoring 12.

The game was tied early in the third quarter before the Spurs went ahead by seven points. Chicago answered with a 10-2 run to take a 74-73 lead on Vucevic’s 3-pointer at the 7:26 mark. The Bulls led by six before San Antonio rallied to a deadlock heading to the fourth period.

The Bulls were without Zach LaVine as the team manages his activity after a left knee injury. The Spurs were missing Devin Vassell, who has a sore left knee.