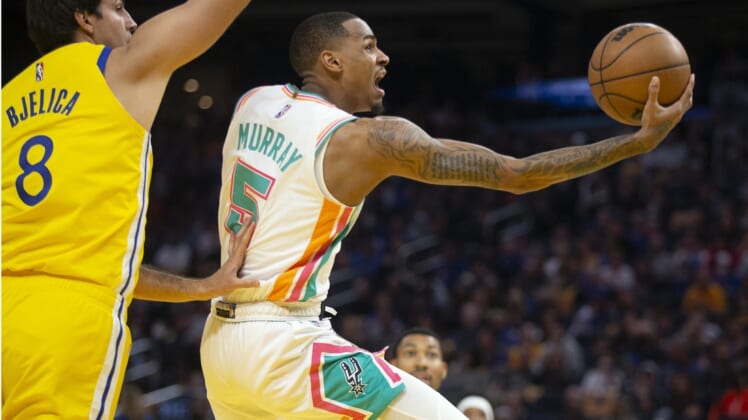 Keldon Johnson followed in a missed free throw with three-tenths of a second remaining Sunday night, allowing the visiting San Antonio Spurs to survive a foul-filled finish to stun the Golden State Warriors 110-108 in San Francisco.

Josh Richardson came off the bench to score a team-high 25 points and was one of six Spurs with multiple 3-pointers as San Antonio won at Golden State for the second time this season.

Jordan Poole led all scorers with 28 points and Klay Thompson chipped in with 24 for the Warriors, who played for the first time since Stephen Curry suffered a foot injury against the Boston Celtics on Wednesday.

After a Richardson 3-pointer had given the Spurs a 107-105 advantage with 1:04 remaining in a game San Antonio had led by as many as 14, Poole drove for a tying bucket 10 seconds later, setting up a wild finish of whistles.

After Dejounte Murray missed a driving attempt for San Antonio, Golden State got off two straight 3-pointers, but Thompson missed with 22.8 seconds left and Poole with 9.2 seconds to go.

Jonathan Kuminga saved a long rebound on Poole’s miss from going out of bounds, and when he was able to get the ball to Andrew Wiggins 40 feet from the basket with nowhere to go, a foul was surprisingly called on San Antonio’s Devin Vassell with 3.0 seconds remaining.

Wiggins made the first free throw, but when he missed the second, Golden State’s Kevon Looney was deemed to have fouled Jakob Poeltl while battling for a rebound that the Spurs big man had secured as San Antonio prepared to call a timeout.

Amid thunderous booing, Poeltl tied the game by making his first foul shot with 2.4 seconds left, and when he missed the second, Johnson ran in from the 3-point arc to seize the rebound and follow it in for the game-winner with three-tenths of a second left.

Johnson finished with 14 points, seven rebounds and five assists for the Spurs, while Murray had his typically strong all-around game with 19 points, six rebounds and a game-high eight assists.

Poeltl grabbed a team-high 14 rebounds to go with seven points, while Vassell added 12 points and Joshua Primo and Zach Collins 11 each.

Richardson and Vassell hit three 3-pointers apiece, while Johnson, Murray, Collins and Tre Jones bombed in two each for the Spurs, who shot 15-for-40 from beyond the arc as opposed to the Warriors’ 11-for-33.

Thompson had six of Golden State’s 11 threes on 12 attempts, while Poole shot 4-for-9 from deep, but that wasn’t enough to prevent the Warriors’ ninth loss in their last 12 games.

Otto Porter Jr. recorded had 16 points and a career-best 16 rebounds for the Warriors, while Wiggins finished with 16 points and eight rebounds.