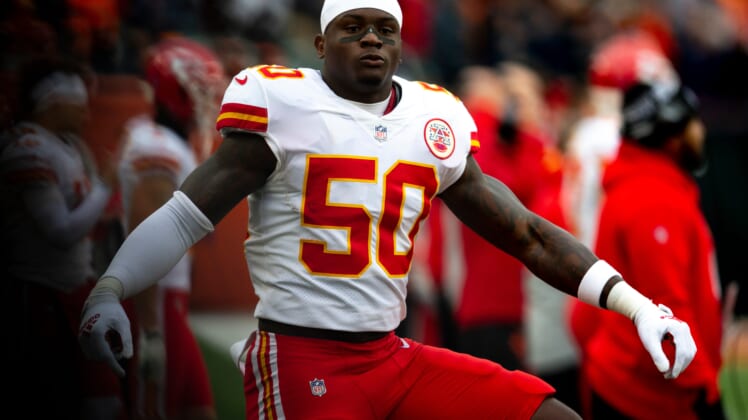 Kansas City Chiefs linebacker Willie Gay Jr. will play on Sunday against the Buffalo Bills days after being arrested and charged with a misdemeanor for breaking a vacuum. But new allegations from court documents paint a more alarming picture of what may have happened.

The 23-year-old linebacker was arrested on Wednesday night at the home of his son’s mother. The couple reportedly got into an argument. Gay’s rep Maxx Lepselter told NFL Network that the Chiefs’ linebacker broke a vacuum but never touched anyone.

According to the Johnson County Sheriff’s booking report, law enforcement charged Gay with misdemeanor destruction of property of less than $1,000. After being released from police custody, the Chiefs cleared him to play Sunday in the NFL Playoffs.

But allegations from the child’s mother tell a different story. In court documents obtained by FOX 2, Gay’s ex-girlfriend described a more alarming incident that allegedly happened before police arrived.

According to court documents, the child’s mother told Gay not to come over at 9 p.m. on Wednesday because their son was asleep but Gay came over anyways. When Gay arrived, he allegedly made jokes about the woman being a single mother and it led to an argument. The woman said she went into another room to call a friend and she was advised to call police, staying on the line until officers arrived.

“Willie kept yelling, calling me names, and said he would be gone before the police got there. He then got angry, snatched my phone and hung up on the officer.”

The woman alleges that Gay aggressively pushed her into the couch, knocking things off her counter and bar. Gay is also accused of throwing her vacuum across the apartment and throwing her phone.

While Willie Gay Jr. was arrested for the incident on Wednesday night, the woman’s protection order also details another alleged situation that occurred in November 2021.

She told police that the “worst incident” came at Overland Park Regional Medical Center. With their son in the hospital on a ventilator, born prematurely, the mother was holding him closely. That’s when she accused Gay of getting upset, standing up and pushing her while she was holding the baby in the chair.

Court documents also included accusations from the woman that Gay threatened to slap and/or hit her, leaving her to fear for her safety.

FOX 4 reached out to Gay’s attorney, who denied the allegations and said they will be addressed in court.