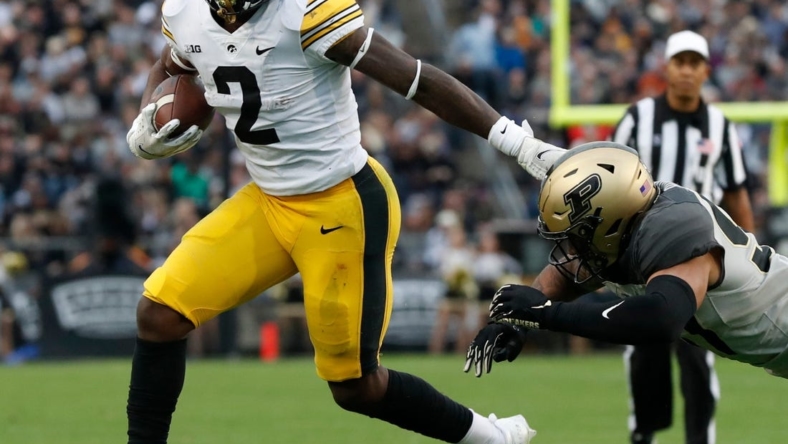 Kaleb Johnson rushed for 200 yards and a touchdown and Spencer Petras threw two touchdown passes to boost visiting Iowa to a 24-3 victory against Purdue on Saturday in West Lafayette, Ind.

The Hawkeyes never trailed and put a stranglehold on the outcome two plays into the third quarter when Johnson broke through the middle then down the right sideline for a 75-yard touchdown run. Johnson, a freshman, rushed 22 times on the afternoon and averaged 9.1 yards per carry.

Petras was 13-of-23 passing for 192 yards and connected for scores with Sam LaPorta and Nico Ragaini.

Charlie Jones, an Iowa transfer, had 11 receptions for 104 yards to pace Purdue on an otherwise difficult day for Boilermakers quarterback Aidan O’Connell, who completed just 20 of 43 passes for 168 yards with two picks.

After punting on their first two drives, the Hawkeyes clicked offensively over their next three, taking a 17-0 lead with 6:11 remaining in the second quarter.

About the only thing that went against Iowa over that span was a sequence on its third scoring drive in which a first-and-goal from the Purdue 2-yard line ultimately transformed into a 26-yard Drew Stevens field goal. A run for negative yardage, a muffed exchange and a sack sent the Hawkeyes moving backward.

Purdue sputtered in a similar fashion on the ensuing possession. The Boilermakers had a first-and-goal from the 2 but had to settle for Mitchell Fineran’s 34-yard field goal with 1:40 left before halftime. Two incompletions and a sack kept them out of the end zone.

The Boilermakers lead the all-time series 50-40-3.