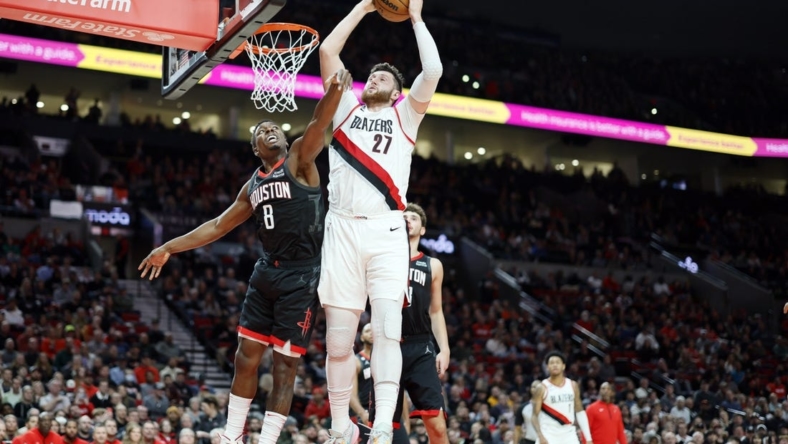 Jusuf Nurkic dominated the interior with 27 points and 15 rebounds, Anfernee Simons excelled on the perimeter with seven 3-pointers, and the Portland Trail Blazers overcame the absence of Damian Lillard to turn back the visiting Houston Rockets 125-111 on Friday night.

Playing for the first time since Lillard suffered a calf injury Wednesday against Miami, the Trail Blazers wasted little time separating themselves from the Rockets, running out to a 27-13 lead in the game’s 11th minute.

Nurkic had four hoops and Simons a pair of 3-pointers in the early surge.

Playing the second of four straight road games, the Rockets got as close as five in the second and third quarters, and were still within reach at 112-104 with 5:06 remaining before going without a field goal for the next 2:11 to fall double digits behind again.

Simons led all scorers with 30 points. His seven 3-pointers came on 15 attempts, accounting for more than half of Portland’s 13 successes from beyond the arc.

Nurkic’s double-double was his third of the season, all coming in wins. He was held to seven points and nine rebounds in the club’s lone loss to Miami.

Making his first NBA start in place of Lillard, rookie Shaedon Sharpe chipped in with 14 points for the Trail Blazers, while Jerami Grant had 15 and Drew Eubanks 10.

All five Rockets starters scored in double figures, led by Eric Gordon with 18. He was followed by Kevin Porter Jr. with 16, Alperen Sengun with 14 to go with a team-high 11 rebounds, Jabari Smith Jr. with 12 and Jalen Green with 11.

Twelve of Gordon’s 18 points came on 4-for-7 accuracy from 3-point range.