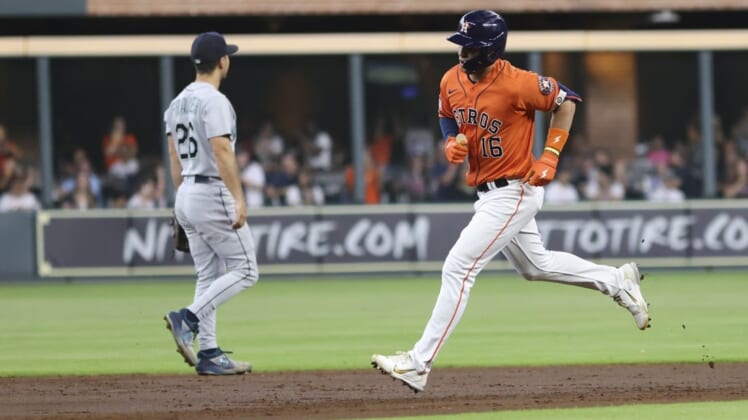 Verlander (14-3) took sole possession of the major league lead in wins by shackling the Mariners, who have dropped five consecutive games to Houston since the All-Star break. The right-hander tossed 7 2/3 innings, allowing one run on five hits and one walk with five strikeouts.

Efficiency was the calling card for Verlander, who had made just 94 pitches, a stark contrast to Mariners starter Robbie Ray (8-8), who threw 84 pitches while recording only eight outs.

Verlander didn’t allow a baserunner into scoring position until Ty France ricocheted a two-out double off the left field scoreboard in the sixth. He carried a shutout into the eighth, departing after Julio Rodriguez doubled home Jesse Winker with two outs.

Ray took his second loss against the Astros in six days. He gave up four runs on five hits and four walks in 2 2/3 innings, striking out three. On July 24, Ray surrendered six runs on 10 hits while notching just one strikeout in three innings.

Diaz began Friday onslaught in the second inning with a solo home run to left. The Astros chased Ray with a three-run third that featured an RBI single from Alvarez and a two-run double from Bregman.

Bregman added an RBI single off Penn Murfee in the fourth for a 5-0 lead.

Alvarez ignited a fourth-run sixth off Tommy Milone with his 30th home run, a first-pitch, leadoff blast 384 feet to right-center. Dubon smacked his fourth homer later in the frame, a two-run shot that extended the lead to 9-0.

Diaz homered again in the eighth inning, his eighth of the season.