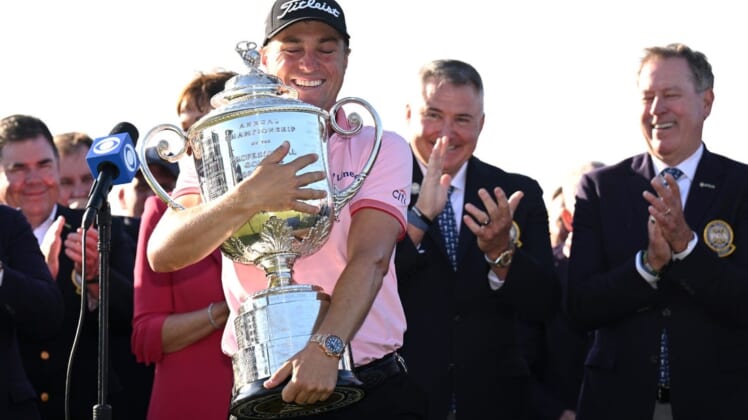 No longer a “one-hit wonder,” Justin Thomas is feeling wonderful after winning his second PGA Championship.

“It was obviously a very fun and whirlwind of a weekend, I guess you could say, but we’ve been working really hard to try to get myself back in that situation, that scenario for a long time, and yeah, the five years has felt like an eternity since Quail Hollow,” Thomas said, referencing the first time he won the Wanamaker Trophy in 2017.

“And yeah, definitely glad that I could finally answer the question of when am I going to get my second versus just being a one-hit wonder, if you will.”

Thomas, 29, was speaking to reporters Wednesday in Fort Worth, Texas, as he prepares for this week’s Charles Schwab Challenge at Colonial Country Club.

He said there will be more time later to celebrate his come-from-behind victory at Southern Hills in Tulsa, Okla., where he erased a seven-shot deficit with a 67 on Sunday.

“Obviously I want to enjoy it and I don’t want to just act like it didn’t happen because it did, but at the same time I have a week next week off potentially to just enjoy it and have some times with my family and friends if we choose to,” he said.

“I have a golf tournament this week, and I’m just trying to perform and play as well as I possibly can, and hopefully give us something else to celebrate.”

Thomas’ win Sunday was his 15th on the PGA Tour and snapped a 14-month winless drought dating back to the 2021 Players Championship.