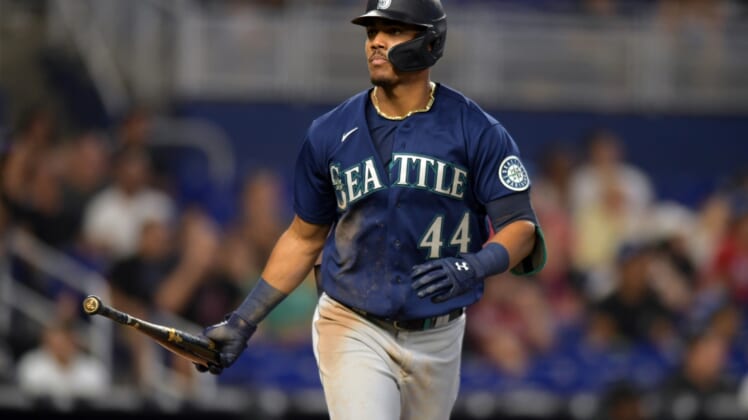 Top prospect Julio Rodriguez slugged his first major league homer — a 450-foot bomb to left-center field — to lead Seattle to a 7-3 victory over the red-hot Miami Marlins on Sunday afternoon.

The Marlins had their seven-game win streak snapped. It was their longest streak since 2016 and fell just two wins short of the franchise record.

Logan Gilbert (4-0), who started the day leading the American League in ERA, earned the win as Seattle snapped its four-game losing streak. He pitched 5 2/3 innings and allowed three hits, four walks and one run, leaving his ERA at 0.64.

Gilbert’s only blemish came on his final pitch, a 97-mph fastball that tailed back over the plate and was slugged for a solo homer by Brian Anderson. That was Gilbert’s 102nd pitch.

Rodriguez, a 21-year-old center fielder who signed with Seattle five years ago, made his MLB debut on April 8. He has been struggling at the plate, entering Sunday with a .205 batting average. He went 3-for-4 Sunday and is now hitting .234.

Seattle opened the scoring in the second as Crawford pulled a 97-mph fastball over the wall in right.

The Mariners, who overcame two errors, also ran into outs in each of the first three innings.

However, the Mariners made it 2-0 in the fourth as Winker doubled and scored on Abraham Toro’s two-out single to left.

In the sixth, Crawford doubled, and Marlins manager Don Mattingly had Toro intentionally walked. Rodriguez made that decision look bad as he homered.

Anderson hit his first homer of the year in the bottom of the sixth to cut Miami’s deficit to 5-1.

In the seventh, Miami made it 5-2 on Jorge Soler’s infield single, but the Marlins stranded three runners when Anderson was caught looking at a 100-mph fastball.

Miami stranded 12 runners in the game, including two more in the eighth.

Seattle extended its lead to 7-2 on Winker’s two-run single in the ninth. Winker went 3-for-5 in the game.

Soler slugged a 451-foot solo homer in the bottom of the ninth to close the scoring.