The event will be held at Coors Field in Denver one day prior to the All-Star Game.

Entering Wednesday, the eight players had 143 homers among them, led by Ohtani’s MLB-best 31. But Gallo added a pair of homers during the Rangers’ afternoon game against the visiting Detroit Tigers. The report that Gallo would compete in the derby broke mid-game.

Gallo, 27, entered Wednesday with 21 home runs in 81 games this year. He hit seven in a five-game span from June 26-July 1 and has 10 in his past 10 games. Wednesday’s home runs brought his total to 23 and marked his fourth multi-homer game of the season. 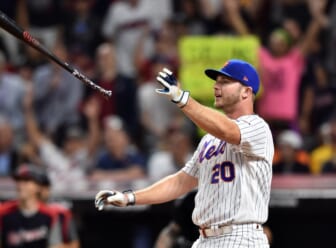 Soto, 22, has gone yard 10 times this season but owns a career mark of 34 home runs in 2019, the same year he helped the Nationals win the World Series. He also finished the 2020 season fifth in National League MVP voting and won a Silver Slugger nod after leading the majors with a .695 slugging percentage and 1.185 OPS.

Both players were named to the All-Star Game, as well. It is Soto’s first All-Star choice and Gallo’s second.

Alonso was the 2019 champion. The event wasn’t held last season.