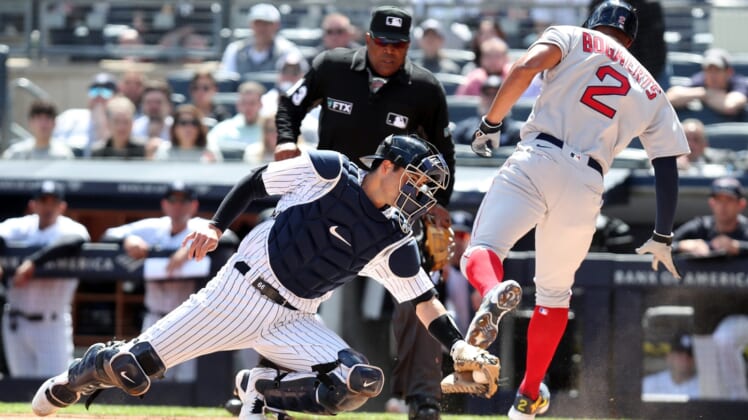 Josh Donaldson singled to lead off the 11th inning, lifting the New York Yankees to a 6-5 victory over the Boston Red Sox on Friday afternoon in the season opener for both teams at Yankee Stadium.

Donaldson won it when he slapped a 1-1 pitch from Kutter Crawford (0-1) into shallow center to score Isiah Kiner-Falefa, the designated runner at second.

DJ LeMahieu forged a 4-4 tie in the eighth inning when he lifted a 1-2, 96 mph fastball into the right-center field seats off Garrett Whitlock, who struck out four of the eight hitters he faced before allowing the second baseman’s homer.

The Red Sox took a 5-4 lead in the top of the 10th on an RBI single by Xander Bogaerts off Michael King (1-0) but J.D. Martinez hit into a double play. King then pitched a perfect 11th.

The Yankees tied it at 5 when pinch hitter Gleyber Torres lifted a sacrifice fly off Ryan Brasier in the 10th but Kiner-Falefa struck out with the bases loaded.

After Stanton’s homer, Alex Verdugo’s single off Clay Holmes gave Boston a 4-3 lead in the sixth.

Cole allowed three runs on four hits in four innings. He struck out three and walked one.

Eovaldi allowed three runs on five hits in five innings. The former Yankee right-hander struck out seven and walked one in a 76-pitch outing.

Devers gave Boston a 2-0 lead six pitches in when he slugged Cole’s 99 mph fastball into the right-field seats after Enrique Hernandez led off with a four-pitch walk. After Xander Bogaerts hit a double over left fielder Joey Gallo’s head, Martinez lined a double to right.

Rizzo made it a one-run game by hitting Eovaldi’s 0-1 splitter to right-center and Stanton lined a 1-1 slider into the right-field seats.

The game stayed tied until Verdugo singled through the drawn-in infield off Holmes after Bogaerts opened the sixth with his second double of the game and advanced on Martinez’s groundout.