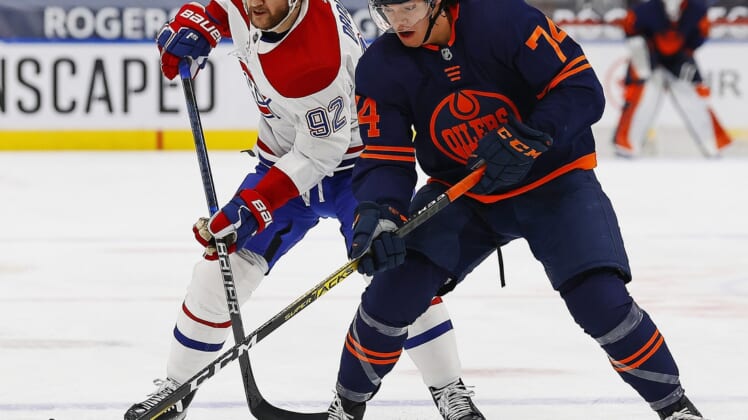 Josh Anderson scored two goals and the visiting Montreal Canadiens held on for a 4-3 win against the Edmonton Oilers on Wednesday.

Tyler Toffoli and Artturi Lehkonen also scored, Jeff Petry and Tomas Tatar each had two assists, and Jake Allen made 22 saves for Montreal (20-15-9, 49 points), which moved eight points ahead of the fifth-place Calgary Flames in the North Division.

Connor McDavid had a goal and two assists, Ryan Nugent-Hopkins returned from a four-game absence and also scored, and Mike Smith made 27 saves for the Oilers (27-16-2, 56 points), who missed a chance to overtake the Winnipeg Jets for second place in the North. Jesse Puljujarvi also scored for Edmonton.

Anderson had put the Canadiens back ahead for good 11 seconds after McDavid had scored on a breakaway to tie the score. Montreal won the faceoff, and Anderson took possession of the puck with speed coming down the left side and drove in close before scoring up high for a 2-1 lead at 3:20 of the second period.

Toffoli took advantage of a giveaway in the Edmonton zone by Josh Archibald on a Montreal power play to score his 22nd goal of the season for a 3-1 lead at 8:10 of the third period.

Anderson scored again on a sweeping backhand from the bottom of the right circle to stretch the lead to 4-1 at 15:03, and Tatar recorded his 200th NHL assist on the play.

Lehkonen gave the Canadiens their first lead when he scored with 29 seconds left in the first period. Jesperi Kotkaniemi got the puck on a breakout and came down the middle of the Edmonton zone. He slowed up in the high slot and fed Lehkonen coming through the left circle. Lehkonen scored on a backhand from in close for a 1-0 lead.

McDavid scored on a breakaway to tie it 1-1 at 3:09 of the second period. Caleb Jones passed the puck from deep in the Edmonton zone to McDavid cutting across the red line. He split two defensemen, faked out Allen and scored his 25th goal of the season.