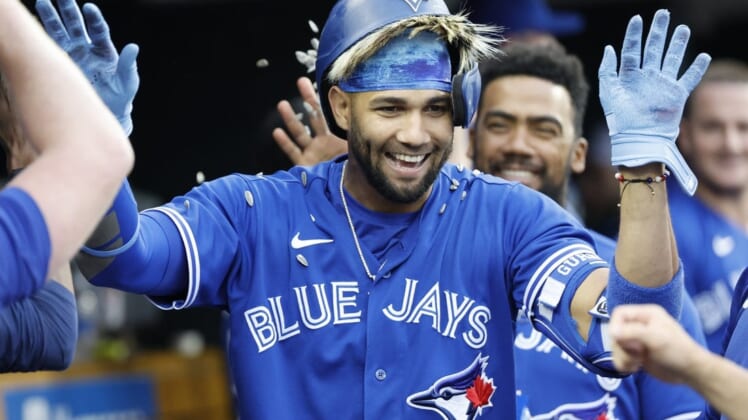 Jose Berrios carried a shutout into the eighth inning and the Toronto Blue Jays had five extra-base hits in the first two innings while rolling to a 10-1 victory over the host Detroit Tigers on Friday.

Toronto’s George Springer had three hits, including a homer, scored three runs and drove in two before being removed for a pinch hitter.

Bo Bichette and Lourdes Gurriel Jr. each supplied a solo homer and run-scoring double for the Blue Jays. Alejandro Kirk also knocked in two runs as Toronto collected its 12th victory in the past 15 games.

Berrios (5-2) gave up one run on five hits and a walk with five strikeouts in eight innings. Jeremy Beasley pitched a 1-2-3 ninth inning to seal the win.

The game was delayed 26 minutes by rain in the third inning.

The Blue Jays grabbed a 2-0 lead in the first inning against Rodriguez. Springer drew a four-pitch walk leading off, and Bichette drilled the next pitch down the third base line for an RBI double. With two outs, Kirk lined a double to right-center to knock in Bichette.

A three-homer barrage in the next inning gave Toronto a 6-0 lead. Gurriel hit his third homer on an 0-1 pitch with one out. After Cavan Biggio walked, Springer blasted his 12th homer over the left-center-field wall on an 0-2 pitch. Bichette followed with his 10th homer to left.

Detroit didn’t have a baserunner until Miguel Cabrera smacked a two-out single in the fourth.

Toronto, which has scored six or more runs in 11 of its past 12 victories, increased its lead to eight runs in the fifth. Vladimir Guerrero Jr. singled and Kirk was hit by a pitch before Santiago Espinal delivered a run-scoring single. That ended Rodriguez’s night, but Gurriel added a two-out RBI double against Jacob Barnes.

The Blue Jays nudged the lead to 10-0 in the sixth against Wily Peralta. Springer led off with a double and scored on a Guerrero double. Kirk brought in Guerrero with a single.